Blockchain technology coming to Merino flocks in May 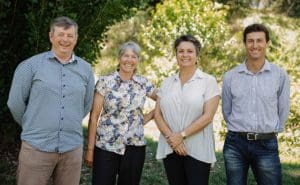 The Australian Ethical Merino Growers Co-Op Ltd launched its website this week and announced the MyOrigins platform and mobile app will be rolled out to current and new co-op members in early May for field testing and data capture.

The co-op was formed to take advantage of national and international market opportunities underpinned by the Textile Exchange’s global Responsible Wool Standard. The RWS prohibits mulesing, but accepts wool from flocks which have ceased mulesing under certain conditions.

AEMG director Andrew Ross said the blockchain mobile app will secure grower data collection processes and create on farm assets that can be tracked and managed via a distributed ledger.

“This means that key data like animal welfare, vaccinations, use of pesticides, stock movement, injuries and corrective actions can be all collected via a mobile device and securely transmitted back to a growers’ portal for reporting and analytical purposes.

“This will feed into a number of uses as it matures over time; many of which are consumer-led,” he said.

Mr Ross said the MyOrigins Agtech platform will help all growers interested in achieving their RWS certification and the longer term harmonization of all on-farm standards.

“This will deliver both an online management platform as well as blockchain-enabled data collection devices in the near term — something quite revolutionary for the Merino wool industry.

“We are starting with a simple mobile phone and blockchain app, but already have interest from IoT providers in terms of integrating data from other types of devices.”

Mr Ross said the wool industry has traditionally been very non-transparent across all aspects of the textile value chain.

“When you consider Australia provides about 85 percent of the world’s apparel wool and we have little or no visibility post farm gate, let alone after the auction process, it is nearly impossible — with the exception of brand-led purchasing from the farm — to identify what wool is found in what garments.

“Being able to start to migrate the on-farm practices and the supply chain data to an accessible technology platform will provide never before made available transparency,’ he said.

“But this is a significant and almost generational change,” he said.

“It will be the first instance of blockchain being built from the Merino grower perspective and their farm practices, linking to the end consumer using a simple QR (quick response) code or NFC (near-field communication) reader.

“It will, however; provide provenance and confirmation of the RWS Certification across this value chain for our first batch of Merino wool that meets this standard,” Mr Ross said.

“It all starts with making the work of the grower simpler through mobile device-captured data, access to IoT data for the farm, animal health data and a common set of farm standards.

“Our commitment is to help the grower manage all of their disparate sets of data, aligned to a global consumer and brand standard (RWS).”

Mr Ross said the AEMG was started with eight growers of various farm sizes and complexity, with at least the same number on a waiting list. The co-op’s initial NSW and Tasmanian members have more than 40,000 sheep, but he said there are about 3000 declared non-mulesed or ceased mulesing growers who use various types of production and brand standards.

“However as AWI shared this week by publishing their paper ‘Planning for a non-mulesed Merino enterprise’, it’s becoming a much bigger consideration for the whole industry longer term.”