Biosecurity is a family commitment at Kia Ora Merino NO lice treatments for 10 years, no footrot and no Ovine Johne’s Disease risk — strict biosecurity has had to production advantages and reinforced the social licence of Finnigan Merino operation in south-west Victoria.

The family recently won the Farm Biosecurity Producer of the Year award at the 2020 Australian Biosecurity Awards.

Kia Ora Merino has managed to keep footrot, lice and drench resistance out of the non-mulesed flock with the application of strict rules.

These include never returning sheep to the flock if they leave the property, keeping boundary fences maintained and fencing off rivers within property boundaries.

Brendan Finnigan said he has lost a flock with Ovine Johne’s Disease on a South Australian property, which made him particularly careful.

“I’ve never had footrot and I don’t want footrot.”

His wife Susan said not having lice is a cost-saving.

She said the Finnigans shear their Merinos five times a year to manage wool length at about 80-85mm across the different mobs and ages, which would make eliminating any lice outbreak difficult. The mobs are shorn about every 10 months.

“We’re finding as our wool cut goes up that our staple length is getting longer.”

The Finnigans shear about 10,000 sheep annually that cut sub-18 micron wool. They breed plain-bodied sheep that do not require mulesing and are not prone to flystrike, meaning reduced chemical usage.

To reduce the risk of introducing new diseases, Kia Ora Merino is a self-replacing flock with its own open nucleus that used artificial insemination to access outside genetics that produce good quality wool suited to high rainfall. The few purchased stock undergo quarantine drenching, inspection, vaccination and other measures before being quarantined in a separate paddock for 21 days.

Biosecurity is a family commitment Susan said getting the commitment to biosecurity was easy for the family operation.

“Brendan is particular fussy about biosecurity, it’s his thing.”

The Finnigans are also strong advocates for best practice livestock and farm management. This has supported their market access and the quality of their farming environment. Their seamless and strict biosecurity measures are incorporated into everyday farming practices. They developed Ethical, Sustainable, Profitable (ESP) wool production, which combined their BIOCHECK® Biosecurity plan with all farm welfare, quality and management processes, and procedures.

Susan said she was also excited by Kia Ora Merino now using the AWEX WoolClip app, which is used in conjunction with the addition of QR/RFID tracking on each wool bale. This meant tracking is possible from farm to product, adding a new level of biosecurity and provenance to the wool.

“They’ve got a training module so you can practice.”

Susan said Kia Ora sold wool in March when Italy was locked down.

“We didn’t want to go to auction and we didn’t have a contract, so Schneider organised the sale for us and because of the tracking stickers on the bales it went through, and it is going to be sold so that it can traced back to the farm, which is a bit of extra insurance for biosecurity.

“If Australia ever had a Foot and Mouth Disease outbreak, we could actually identify and isolate or quarantine wool from that particular area.”

Strict rules for equipment and visitors 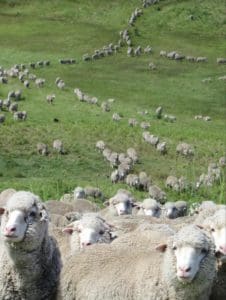 The Kia Ora Merino flocks checks out the visitors.

Equipment is kept on the property to avoid contamination. Visitors must follow biosecurity signage and sign a logbook. Visitor vehicles are directed to specific parking locations and visitors use farm vehicles on the property. New footwear is also provided to shearers to stop the spread of lice between sheds.

Kia Ora Merino has also played a role in influencing and enabling other farmers to take biosecurity measures.

The family uses social media and the Kia Ora Merino website to maintain transparency and communicate farm practices to customers and the public. Kia Ora Merino was one of the first farms in the local area to introduce biosecurity signage at all entry points.

Kia Ora Merino has won several awards, including the Premier’s Sustainability Awards 2019 and the Lambition Awards Meat & Livestock Australia Sustainable Producer of the Year 2020. The farm is also accredited under the Fox & Lillie Rural Genesys group for Responsible Wool Standard (RWS). The family also works towards protecting remnant vegetation and is involved in the Australian Platypus Monitoring Network.