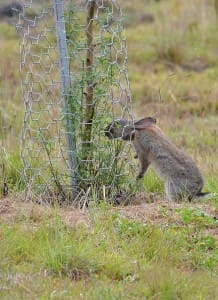 NEW effective, humane and target-specific methods of rabbit control, including bio-control agents, are high priorities in a draft national plan to tackle the major environmental pest.

The draft ‘Threat abatement plan for competition and land degradation’ was released today by the Department of Environment, outlining how rabbits affect more than 300 nationally-threatened species, double the number estimated in 2008.

It is open for public comment until March 16 2016 at www.environment.gov.au/biodiversity/threatened/threat-abatement-plans/drafts-open

“Rabbit biocontrol has reduced the risk of extinction for many threatened species.

“We know that when rabbit numbers fall the benefits to the environment are high,” he said.

“After the release of RHDV in 1996, studies found that populations of native animals increased, native vegetation regenerated, and fox and feral cat numbers decreased in some areas.”

The draft plans places a high priority on:

– Increasing understanding of the seasonal patterns of RCV-A1 and its interaction with RHDV.

– Conducting pre and post monitoring to determine success of biocontrol releases across a range of landscapes.

However, Mr Glanznig said biocontrol is not a silver bullet and everyone must be vigilant when it comes to managing rabbits.

The RHD Boost initiative aimed to find highly lethal strains of rabbit haemorrhagic disease virus that can counteract the decreasing effectiveness of existing RHDV strains and provide effective control in cooler, wetter areas. It is expected to provide a net benefit of $1.4 billion over 15 years ($840 million in agricultural benefits and $560 million in carbon sequestration benefits.

The K5 strain from South Korea (South Korea 08Q712-1) has shown the most promise, demonstrating that it can overcome the immunity caused by the endemic RCV-A1 strain (Invasive Animals CRC 2014). It has also been found to kill adult rabbits faster than the existing Czech strain (Invasive Animals CRC 2014). Approvals for the release of the K5 strain are being sought. An associated RHD-Boost Release and Performance Measurement project would evaluate the interactions between the different strains of RHDV in the field with any new strains.RHD Accelerator

The RHD Accelerator initiative sought to develop platform technology to rapidly accelerate the evolution of the virus and allow for the continuous selection of highly lethal strains. It is estimated to achieve a net value of $79 million over 15 years and $300 million over 30 years. However, the positive impacts of this initiative are not expected to be realised until approximately 2022/23.

A bio-prospecting initiative aimed to identify and assess potential new biocontrol agents to reduce rabbit numbers by assessing currently known rabbit pathogens and identifying new biological control agents. This is expected to provide a net benefit of $28 million over 30 years.

Rabbits are bad news for farmers and wildlife

Threatened Species Commissioner Gregory Andrews said the rise in rabbit numbers was not only bad news for farmers, but also for threatened native species like quolls, bandicoots, bettongs and the mountain pygmy-possum.

“It’s a sad fact there are more rabbits in Australia than there are of any native mammal species, including kangaroos.

“Not only do rabbits compete with local animals for food and burrows but they also destroy habitat, eating native plants and eroding soils so that weeds take over.

It only takes one rabbit per football field sized paddock to affect native species,” he said.

“The science is also clear that uncontrolled rabbit populations can allow feral cat numbers to escalate because the cats can breed more quickly when food is abundant.”

Mr Andrews said we all have a role to play in saving Australian wildlife from extinction and protecting farmers’ incomes.

“Rabbits don’t stop at property boundaries and efforts to tackle them shouldn’t either. We need all landholders on board – from farmers and community groups to local governments and conservation land managers – if we are to tackle this threat effectively.