Big Ampi aiming to take goats to next level BIG AMPI Rangeland Goats is a business that is having a red hot crack at changing the Australian goat industry.

In recent years the collaborative family-owned enterprise has invested in 120,000 hectares across three grazing properties in the NSW western division, headquartered around Big Ampi Station near Menindee (The name ‘Big Ampi’ draws from a large amphitheatre-like lakebed on the property).

The operation is owned by six families, four of which were connected through attending the same Western Victorian boarding school.

All of the owners are actively involved in the running, management and planning of the Big Ampi enterprise and bring an incredible diversity of skills, qualifications and experience to the enterprise, including ag science, commerce, law, horticulture, viticulture, beef production, pork production, fine wool production, lot feeding, irrigation, logistics, transportation, retail and commodity exporting.

The Big Ampi group’s core aim  is to develop a professionally managed, large-scale and sustainable goat farming business, in an industry that has been traditionally dominated by the opportunistic harvesting of wild rangeland goats.

The recent rise of goat prices in Australia to over $10/kg dressed weight – well above standard grid prices available for cattle and lamb – has only served to reinforce the owners’ belief that Australian goat farming is an industry with enormous potential. 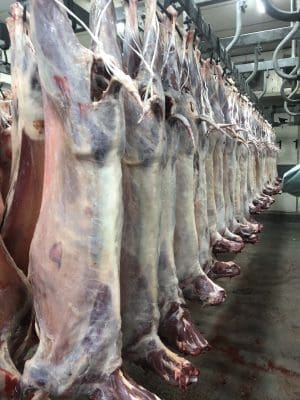 While there is no arguing that strong export demand exists for goat meat globally, the Big Ampi group also believes genuine opportunities exist to increase consumption of goat meat domestically in Australia, provided a consistent, reliable supply of higher-quality goat meat can be produced year round.

The problem? In a nutshell, it is the ‘unknown unknowns’, James Boland, one of Big Ampi’s owners, said in a presentation about Australian goat meat industry, challenges and opportunities at the ICMJ conference in Wagga Wagga earlier this month.

So much of the research that has provided an in-depth understanding of genetics, nutrition,  feed conversion, parasite control, meat eating quality etc in the cattle and sheep industries in Australia has simply never been done for goats.

Producers looking to run goats professionally behind fences are having to start from a very low knowledge base.

“If you do a literary review on the research into goat nutrition, there is hardly anything there,” Mr Boland told the conference.

‘You can find more research on how to fatten a llama’

“‘You can find more research on how to fatten a llama.”

The Big Ampi team is doing what it can to bridge the gap, not only in its own knowledge but that of the broader industry’s, as quickly as possible.

It has partnered with several organisations including UNE, MLA and NSW DPI to launch a range of trials on Big Ampi and in abattoirs, with projects designed to help answer a range of questions such as what are the most effective feeding strategies, the best breed combinations, and how digital tools and spatial data can be used to improve tactical decision making. 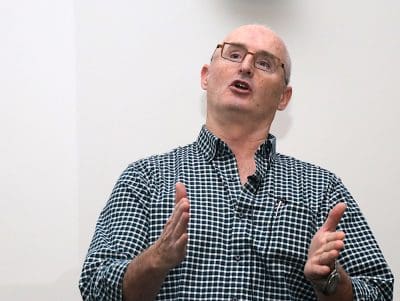 “It has been a lot of trial and error but we’re learning all the time,” Mr Boland said.

“If we’ve had a win we’ll tell you about it, and if we have discovered where we have made a mistake we will tell anybody that is interested so you don’t make the same mistakes.”

Most Australian goat meat is exported as frozen six-way cut, then sold in two-inch cubes with no price distinction for producers selling an emaciated wild goat versus a well-muscled crossbred.

“We need to define what quality looks like and right now we actually don’t know,” Mr Boland said.

“There is no grid for goats.  At the moment every goat you can catch and put on a truck gets treated the same.

“We think there is a better opportunity, we can do more than that, but we’re way behind where we need to be.”

The potential to improve farmed genetics is massive in the Australian goat industry and a key focus of some of the current research on Big Ampi. Projects are underway to try to identify a superior breed composite which can harness the survivability of rangeland goats, the fertility and fecundity of Angoras and the productiveness and meat quality of other introduced breeds.

The enterprise is operating in a semi-arid rangeland environment, with a rainfall average of just 250mm-300mm per year. Almost no rain for the past two and a half years has had an impact on the desired rate of enterprise growth.

This time last year the Big Ampi operation had built up to 6000 does, and planned to grow to 8000 by this year. However, persistent dry conditions have since caused the owners to destock from both ends of the age spectrum, with numbers now back to 4000 productive does. The drought has also temporarily slowed the fencing program as investment is diverted into buying-in feed. 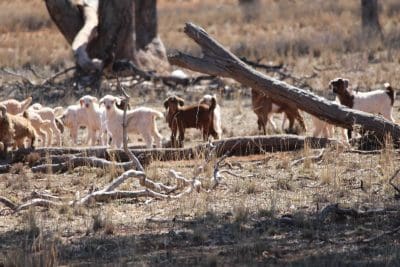 Primary learnings so far have included the importance of a compact kidding to improve consistency of turnoff. Goats become sexually active at a very young age which can lead to significant variations in weights when bucks are allowed to run with does year round.

While some claim goats do not respond to supplementary feed, results on Big Ampi have highlighted the productive performance that can be gained by feeding to maintain doe condition. Faba beans and vetch hay in particular have proven to be an effective feed option, when they can be bought at the right price.

Among questions that still need to be answered through research include how to best manage weaners in a rangeland setting and how they respond to different feed sources.

“We’ve got an instinct about that that but we’d like to see some science around it.”

Meat quality issues are also being explored. Mr Boland said the current thinking is that the optimal carcase size is about 15 kilograms.

“Consumers probably aren’t going to pile their plate high like you do with a big tomahawk steak and will probably eat it in smaller portions, and we think that is probably going to lend itself to a carcase that is about 15kg on the hook.”

The longer term plan in five to 10 years’ time is to be turning off around 30,000 goats per year, all of a similar age and weight.

Another challenge for the goat industry is to normalise the idea of consuming goat meat in Australia.

“It is just another protein source, a fantastic protein source, and it shouldn’t be a competitor necessarily to the beef and the lamb industry, it should just be another choice that is available on the shelf in the supermarket.”

“We would like goat to be a mainstream protein choice, it is not foreign or exotic, we think that we should be paid a premium for quality carcases consistently supplied.”

“It is too good for stew. Natural rangeland grown and it is really good for you.”