EARLY lamb losses could be costing the Australian sheep industry hundreds of millions of dollars, yet many producers don’t even know it’s an issue.

Understanding exactly how many lambs are lost between conception and marking could hold the key to boosting profit margins for sheep producers. 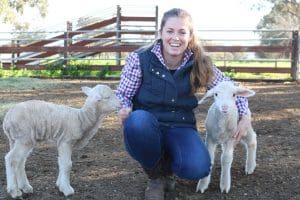 A survey of almost 150 producers conducted by PhD candidate Kayla Kopp as part of her doctorate has shown a gap in recognising exactly how many lambs die in the first few weeks post lambing.

Presenting her survey findings at the Graham Centre online livestock forum last week, Ms Kopp said the survey showed NSW producers estimated they lost anything from nothing to up to 30 percent of their lambs in the first weeks of life.

Those producers were asked to nominate how they calculated those losses, with 62pc calculating the number from dead lambs observed and 48pc using scanning to marking figures.

Astoundingly, 22pc estimated their lamb losses on a “general impression” of how they felt lambing had gone.

“Research shows that between 10 to 30pc of lambs die in the first week of life, and that is a huge financial loss to the industry,” Ms Kopp said.

She said earlier research in 2014 estimated national lamb losses at about 10 million per year, which when valuing lambs at a conservative $150, meant the total loss to the industry was $1.5 billion.

Becoming aware of how many lambs were being lost was key into turning this figure around, Ms Kopp said.

“Once producers understand the number of lambs lost, the cause of mortality can be determined to allow management improvements to be made to reduce that mortality,” she said.

But producers were over-estimating the amount of lamb losses due to predation, she said.

“Predation deaths were estimated to be between 18 to 21pc by producers, which is considerably higher than the 7-8pc reported in published data,” Ms Kopp said.

“It seems producers are likely to be over-estimating mortality associated with predation, when these lambs may have been compromised by a primary cause of death, such as dystocia, starvation, mismothering, exposure or infection.”

Ms Kopp said it was recognised that not all lambs could be saved, but there was the potential to save more lambs if producers had a better understanding of the true loss.

The survey showed up to 80pc of producers did scan their flocks, but many only scanned to see if the ewes were in lamb or not rather than for singles or multiples.

Ms Kopp said while scanning purely for whether ewes were pregnant or not offered value in terms of ousting non-performers, scanning for multiples would give a clearer indication of the number of potential lambs in the flock.

“Not all producers scan, so if they don’t, it would be difficult to determine the lambs they are losing,” she said.

“Yes, it is good to know how many foetuses you do have, but it is really important to understand those early lamb deaths, both how and how many, to be able to make management changes to lessen those fatalities.”

While some producers may think they saw all lambs that die, Ms Kopp said that was not the case, with long grass hiding dead lambs and predators taking bodies away masking the losses.

She said while the financial cost of losing up to 30pc of lambs in the first few weeks of their lives was one thing, there were also animal welfare issues which producers needed to appreciate.

“I am not here to say that every lamb will live because clearly there is going to be some level of mortality due to deformity or other issues,” she said.

“But the research that shows that up to 30pc of lambs are lost in the first week of life is too high, and we need to look at things to make a difference.

“Understanding how big those losses are is the first step.”

Ms Kopp said producers worked hard to get ewes in lamb and invested heavily in the cost of rams and then feeding the pregnant ewe the right nutrition for the five-month pregnancy. They then needed to ensure the lambs they worked so hard to get, survived.

“I think that producers just don’t realise that the losses are so great,” she said.

“If they see five dead weaners in the corner of a paddock, they jump into action but there just doesn’t seem to be the same kind of attention with those early losses.”

Ms Kopp is currently finalising her PhD which has looked at pre lambing nutrition in sheep, which has been completed at Charles Sturt University at Wagga Wagga, NSW.