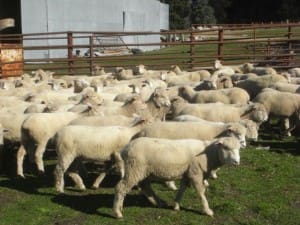 These 7-8 month-ild 18kg cwt Poll Dorset cross lambs at Bombla sold for $116 on AuctionsPlus on Tuesday.

Processors were discerning in some larger yardings of mixed quality lambs and while domestic and export buyers were willing to pay well over 600c/kg to secure well-finished lines, especially in Victoria, markets seem to be settling around 550-600c/kg for slaughter lines.

At Forbes in NSW, despite rates generally falling $5-$7, processors paid around 600c/kg for the best trade lambs, while at Dublin in SA and Muchea in WA, slaughter lamb carcase prices were kept under 600c/kg.

In Victoria at Bendigo on Monday, despite an easing in quality, prices lifted, with well-conditioned lambs to supermarket buyers and lightweight slaughter lambs benefiting most. The National Livestock Reporting Service said light 2 score crossbred lambs sold to processors at up to 636c/kg cwt, a rise of 53c/kg, while Merinos gained up to 40 cents and averaged 546c/kg. Trade weight 3 score crossbreds to slaughter improved 9-11 cents, averaging 554-590c/kg cwt. Heavy lambs to the same orders were 18 cents dearer at 570-580c/kg cwt.

Mutton prices lifted for quality in Victoria, but dipped at NSW saleyards, with dwindling processor competition for overall lower supplies. Bendigo’s medium weight 2 score Merino ewes lifted 35 cents to 371c/kg cwt on Monday, while at Dubbo the NLRS said light and medium weight Merino ewes were back by up to 27 cents to around 340c/kg cwt. Medium 3 score Merino wethers eased 21 cents and averaged 371 c/kg cwt.

“I just think it has peaked, that’s about where it is.

“I just think the big boys don’t want to go any further than where they are,” he said.

Mr Miller said processor and buyers were telling him it is “hard enough” to sell lambs at the current prices.

“At the end of the day if they can get their lambs back to 550-560c/kg I think it will hold there, I can’t see it getting any stronger.

“Your trade lambs will get a bit over 600c/kg as we go on into June and July, but I can’t see the job taking off,” he said.

“I think it is going to thaw out pretty much where it is now.”

After Tuesday’s saleyard markets, the National Livestock Reporting Service quoted the main Eastern State Daily Indicators for slaughter and restocker lambs as firm to slightly dearer. The ESDIs for lamb are: restocker, 558c/kg, up 5 cents; Merino 512c/kg, no change; light 541c/kg, down 4c; trade $574c/kg, up 2c; heavy 582c/kg, no change. The nation trade lamb indicator is at 577c/kg and the heavy indice closed at 589c/kg.

Western Australia’s OTH rates for this week were not available when the article was published.

The NLRS said there were some excellent lines of heavy weight lambs yarded along with a large percentage of lightweights. Ideal trade weights were in limited supply.

The NLRS said lamb quality was similar to the previous sale with better finished and plainer lambs penned. Trade and heavy lambs were well supplied.

The NLRS said lamb quality slipped and there was fewer well-finished lambs carrying weight. All the regular buyers attended, although competition from some exporters on the heaviest lambs was still subdued.

The market showed a dearer trend of $2-$8 across most sales, with well-conditioned lambs suiting supermarket orders and lightweight slaughter lambs recording the best price gains. Bidding reached a top of $168 for a small pen lot of extra heavy export lambs.

Lightweight lambs, 16-20kg cwt, sold strongly to processors and a handful of restocking and feedlot orders, with the bulk of sales from $90-$118 and some categories averaging over 600c/kg. Quality played a role in price outcomes for medium and heavy domestic lambs, with buyers favouring well finished shorter-skin pens.

The trend of supermarket buyers pushing into heavier weights of up to 26kg also continued. The lead pens of lambs sold to domestic orders at $138-$160. On a carcase basis there were lambs making over 600c/kg cwt, but when the heavier lots and plainer trade lambs were added into the mix price averages were mostly in the 560-590c/kg range. There were only limited pens of heavy export lambs and these sold in a tight dollar per head range of $160-$168, regardless of size, which caused some carcase price fluctuations.

Processor competition for mutton was keen despite not all the regular buyers operating at their usual capacity and prices strengthened, particularly for Merino sheep. The mutton sale was generally $6-$10 dearer, although some categories of Merino sheep improved by much more than this. Extra heavy crossbred ewes sold from $105-$130, averaging an estimated 350-360c/kg cwt. Most of the Merino sheep averaged over 400c/kg cwt, with ewes selling to $125 and wethers to $126.

The NLRS said lamb quality was again good. Most of the regular buyers operated strongly in wet conditions, with lambs mostly selling to a dearer trend, up $4-$8 on last week and more in places. Well-finished lambs suitable for the domestic trade sold to very keen competition, as did the several pens of excellent quality extra heavy export lambs that sold from $200-$202.

The NLRS said a smaller field of trade and processor buyers attended and not all were fully active on the mixed quality offering. Prices tended to fluctuate across the market and lambs sold easier. Lightweight lambs to the trade ranged from $60-$97, while lightweight trade 2 and 3 score lambs made $90-$105.

A number of pens of sheep and lambs were kindly donated with the proceeds going to the local variety club, with the highlight being the opening pen of five lambs estimated at 34kg making $250.

The NLRS said widespread rain with good falls in the coastal regions reduced numbers by almost 40 percent. Quality was fair, with some good heavy and prime lamb drafts and solid numbers of secondary and light lambs. All buyers were operational, with live exporters active on all wether categories.

There were reasonable supplies of well-conditioned mutton available along with the lighter drafts. Wether, hogget and ram supplies were limited and sold firm to slightly dearer. Ewe prices lifted $2-$6, with light weight drafts making $40-$59. The 2 score processor mutton sold from $62-$91, up $2, to average close to 340c/kg cwt. Better conditioned and heavy weight ewes lifted $4 to make $75-$100.50. Wether prices remained firm to $5 dearer, with export weight drafts making $85-$112, while feeders and restockers paid mostly $70-$100. Ram lambs reached a top of $121.50 with processors, with most young rams making $50-$90. Old rams sold for $10-$70 to processors.