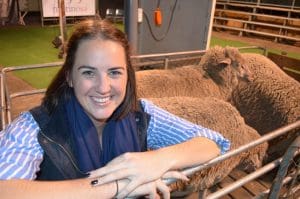 To become eligible for cash prizes and complimentary registration for the Lambex 2016 conference in Albury on August 10-12, industry young guns are invited to share their experience, project, research, study, thoughts and ideas covering any whole lamb value chain activity.

Entrants will be divided into three divisions – high school and under-graduates; Honors, Masters and PhD students, and early carer professionals – with a first and only prize of $400 for each.

Entry to the national competition is free and 12 finalists will be invited to LambEx with complimentary registration, but will need to cover their own travel and accommodation.

Now working as a Sheep Genetics MERINOSELECT development officer Caris entered the competition in the Honours, MSc, PhD section, to promote the results of her University of Western Australia Bachelor of Agricultural Science Honours project on the topic: Improving feed efficiency has a negative impact on the fertility of Merino ewes mated at seven to 10 months of age.

“It was a chance to promote my results, but it has led to so much more.

“For anyone hesitant to enter, I would really encourage them to give it a go,” she said.

“It has helped so much from a networking perspective, being able to meet people already established within the sheep and lamb industry to meeting the other finalists.

“I met my now boss, plus many other people from key industry groups including Australian Wool Innovation and Meat &amp; Livestock Australia.”

Caris said being able to attend LambEx 2014 had also been a boost.

“The wide-range of issues and topics discussed was very interesting and I learnt a fair bit – lamb survival was a highlight.

“From a producer perspective the industry stands were also great, I attended with my parents and we ended up buying quite a few different products.”

Caris will return to LambEx 2016 on August 10-12 in Albury, NSW, as a presenter – to share her insights into making a professional career in the sheep industry and exploring the application she sees for MERINOSELECT in Merino breeding enterprises, including her own family’s stud breeding enterprise in WA.

“I’m really excited to be able to come and present at LambEx this year,” she said.

“It’s a great opportunity to be able to come back and be a part of the event, I really look forward to attending and meeting this year’s Young Gun finalists.”

Caris grew up on Ejanding Poll Merino Stud at Dowerin, WA, and said her ultimate aim had been to work in the sheep and lamb industry.

There is a limit of three applications per high school, and five per university / business.

It’s envisaged that High Schools may run an internal competition to select 3 applications.

Applicants are invited to