Mr Plunkett said the Merino Carding Indicators all improved, jumping 15-20 cents at the east coast auctions. However, Merino skirtings eased and crossbred wools were the weakest sector in the overall market and provided the biggest drag on the EMI during the sale, he said.

“The falls were as large as 20 cents in Melbourne on the back of the biggest national crossbred offering in nine months.”

Mr Plunkett said 56pc of the total national bale offering came out of the Melbourne auction which hosted its second largest sale for the season.

“Most of the loss in the benchmark indicator came from the Sydney market where the soft market pulled fleece types back 5-10 cents and values came closer into line to Melbourne prices.

“Melbourne was more resilient and even managed increases in the 18-22 micron range,” he said.

“The 21-22 range rallied 10-15 cents in that selling centre after renewed interest on the final day.”

Mr Plunkett said despite the losses in some parts, the better Merino fleece types — high strength (40nkt), good length (80/90mm), and low mid-break — were still a source of optimism as they continued to maintain buyer support during the week.

“Small improvements in prices continued at the east-only series on Thursday which finished the week off on a positive note.”

Hopes for solid prices till Christmas

Australian Wool Innovation’s weekly wool market report said the stronger Australian dollar against all of the major trading currencies failed to dampen the enthusiasm of a limited number of buyers locally, as the two largest buyers – Chinatex and Techwool Trading — purchased almost 30 percent of the national offering. Overseas interest in new business was dull early in the week and waned further somewhat as the dollar rose, but as the market refused to yield, sporadic fresh interest in forward purchasing began to emerge, the report said.

Just under 39,000 bales is on offer next week. Last year more than 54,000 bales was offered in the corresponding sale week.

“The intense buying activity of the two largest buyers this week will need to continue to sustain or improve prices against the stronger currency environment and negativity of other buyers.

“Even though the month of December sees an extra sale scheduled, the overall growing shortfall in weekly volumes should hopefully see prices maintained solidly through to the Christmas recess,” the AWI report said. 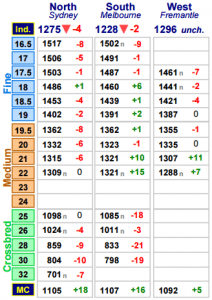