Rates for all slaughter lambs bar the heavy export lines are generally settling above 600c/kg cwt in most eastern states centres as domestic buyers go heavier and some exporters back off in saleyards.

Coles last week brought out a spot price of 620c/kg for 18-25kg cwt lambs and agents expect other buyers to follow its lead.

Mutton prices also strengthened to 400c/kg and better for well-covered medium and heavy lines despite few buyers in the market and several centres managing to yard more sheep mid-week.

At Hamilton on Wednesday, Lanyons auctioneer Warren Clark said the market was very strong for lambs whose quality reflected the season. The medium, heavy trade and light export lambs were making around 600c/kg.

“There is hardly a lamb making under 600c/kg cwt.”

Mr Clark said only the under-done 18kg cwt lamb was struggling to make 600c/kg, whereas 2-3 weeks ago these were being propped up by store buyers.

“Obviously they’ve disappeared because you’ve really got to worry about age of the lambs and when they are going to finish.”

He said some exporters were not buying lambs and those operating were going as low as 23kg cwt, while supermarkets are purchasing up to 24-25kg.

“So it is pretty strong for those lambs that are 21-25kg if they are finished.”

Mr Clark said the worry is that lamb prices might get to 700c/kg cwt and ignite a media-fuelled consumer reaction.

“Who knows? It’s been there before — it is not like the cattle market where we are in uncharted territory — we’ve been up there before.

Mr Clark said he could not remember a previous time in the industry where wool, lamb, mutton and beef prices were all good.

In NSW at Wagga on Thursday, Landmark livestock manager Peter Cabot said prices for the better medium and heavy trades are consistently making 600c/kg or more, with domestic buyers buying heavier lines because they can’t get enough light lambs.

“I would say for the last three to four weeks they’ve been making around 600c/kg.”

One feedlot buyer was very strong at Wagga yesterday, paying up to $136 for lambs. One line of heavy export lines sold for $206 and were estimated at 40kg dressed.

“I reckon or heavy lambs are making 550c/kg-plus.”

The National Livestock Reporting Service quoted all its Eastern States Daily Indicators for lamb categories, except for heavy lambs, as lifting after Thursday’s saleyard sales. The ESDIs for lambs are: restocker 566c/kg, down 6 cents; Merino 508c/kg, up 6c; light 540c/kg, up 4c; trade 578c/kg, up 3c; heavy 580c/kg down 1c. The national trade lamb indicator was up 3 cents at 582c/kg and the heavy indice is down one cent on 581c/kg.

The ESDI for mutton closed up 5 cents to 377c/kg and its national counterpart is at 376c/kg, also up 5 cents.

The NLRS the quality of the trade and heavy lambs was good, but there were some plainer secondary lines. Mainly trade and heavy weights were penned, along with a fair supply of store lambs suitable for the restockers. All the buyers competed solidly, resulting in a generally firm market. The better trade lambs sold to a dearer trend.

The NLRS said lamb quality was mixed, with a greater variance across lighter weight categories. A full field of buyers attended, but not all major export companies operated fully. There was increased competition from local restockers after receiving rain earlier in the week. Trade lambs were in greater supply and quality improved, which caused prices to lift for well-finished shorter skinned lambs. Light trade weight lambs were in reasonable supply and strong lot feeder demand created a dearer price trend.

Light trade lambs to slaughter averaged 123.60. Medium and heavy trade lambs were in reasonable supply and quality pens of lambs suitable for major domestic processors and select butcher orders lifted prices $3, to average 619c/kg cwt. The better pens of shorter skinned lambs, 20-22kg, made from $140-$151.20. Merino lambs were well-supplied and well-finished pens suitable for the trade made from $108-$135.60. Plainer light weight lambs to the processors sold $7-$13 dearer due to a stronger level of restocker demand. Rain inspired increased local restocking competition, with prices in general lifting $4-$7 higher. Well-bred lambs returning to the paddock made from $90-$113. Heavy and extra heavy lambs sold to weaker competition, with only one major processor operating sporadically on the better-finished pens. The bulk of the heavy and extra heavy lambs made from $160-$206. Heavy lambs averaged 611c/kg cwt, while the extra heavy pens averaged from 594c/kg.

Mutton quality was mixed, with most of the sheep medium and heavy weights. Merino ewes suitable for the trade were well-supplied and competition strengthened due to increased buying competition in this category from the south. Trade sheep made from $72-$118 to average 397c/kg cwt. There were more heavy sheep and the heavy wether portion ignited bidding for live export. Heavy wethers made from $108-$143.20 to average 426c/kg. Heavy ewes ranged from $110-$135.

The NLRS said lamb quality was again good. Most of the regular buyers operated strongly in wet conditions.

The NLRS said lamb quality was mixed, with some good pens of medium and heavy trade weights, though most were lighter secondary 1 and 2 scores, suiting some of the usual buyers.

Restockers were active in the sale, as extra light lambs came back $5-$6 at times, while some local agents purchased Merino lambs and sheep. Light trade lambs were unchanged, as the processors competed strongly and paid $3-$7 more for the better-finished medium domestic and heavy trade lambs. Light weight 1 and 2 score lambs sold from $59-$102 and the light trade 2 scores sold from $103-$122. Medium trade and heavy trade weight 3 and 4 score lambs sold from $117-$140, to average 605c/kg cwt. The extra heavy 4 score lambs made $143-$172, averaging around 590c/kg.

The NLRS said most of the usual buyers operated in a generally firm market on the trade weight lambs. The heavier lambs sold a few dollars easier, although the quality was not as good. 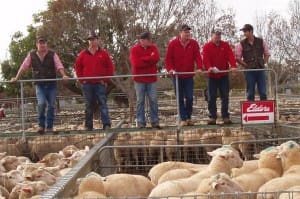 Ouyen’s Elders team get ready to swing in action this week. They sold lambs for up to $166 for RS Bennett of Karrawinna.

On Thursday at the Ouyen Livestock Exchange, the agents offered 11,219 lambs and 1653 sheep.

All the regular buyers attended, but not all were active. Despite this, prices for quality export lambs reached $196 or 580c/kg, up $5-$8 on the previous sale.

The NLRS said the mixed quality lamb yarding sold to a smaller field of trade and processor buyers.