Best lambs still making up to 600c/kg as quality fluctuates 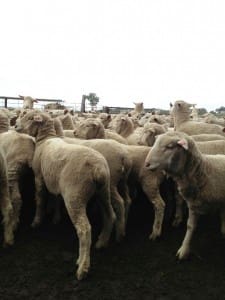 These 7-8 month-old 17.2kg cwt White Suffolk cross lambs sold for $123.50 at Guyra on AuctionsPlus on Thursday.

Prices for quality trade and heavy lambs were maintained at around 600c/kg cwt in major saleyards mid-week, though buyers were able to pay less where higher numbers of plainer lambs were offered.

At Wagga on Thursday, in a much bigger yarding than last week, prices for medium and heavy trade weights eased $8-$10 on average, reflecting the plainer quality, but rates for short-skinned runs held firm.

This contrasted with firm to dearer prices for slaughter lambs in major Victorian centres where medium and heavy trade, and export-weight lambs made 570-610c/kg cwt. SA restocker interest at Hamilton on Wednesday lifted light 1 and 2 score lambs $5-$7 dearer to average 620c/kg cwt.

Prices for quality mutton sheep held firm to dearer in most saleyards, though the National Livestock Reporting Service’s national and Eastern States Daily Indicators lost six cents to close on 372c/kg after the close of Thursday’s sales.

The NLRS said lamb quality fell with a greater number of light weights and secondary lambs offered. Heavy weights were well-supplied along with large runs of light Merinos. Ideal short skinned trade weights were limited but sold strongly. All the usual buyers were operating in a slightly cheaper market.

The NLRS said lamb quality was plainer overall. The regular buyers attended, plus one domestic processor. Restocker activity was stronger with some South Australian agents re-entering the market for the first time in a number of weeks and this, combined with more urgency from a local processor to obtain numbers, lifted light 1 and 2 score lambs $5-$7 dearer to average 620c/kg cwt. Competition also remained spirited for the medium trade and heavy trade lambs, 3 and 4 scores, as they were firm to $3-$7 dearer, making from $120-$151 in a fluctuating stronger sale to average 610c/kg. Heavier trade and export lambs, 4 and 5 scores, sold from $153-$200, making from 580-600c/kg cwt.

The NLRS said lamb quality was again good, with most lambs selling to a dearer trend to be $2-$5 dearer than last week. The usual buyers group attended, but not all operated fully. Restockers were quiet, but paid to $84 for lambs, to $146 for first cross ewe lambs and to $93 for Merino wethers.

The NLRS said the usual trade and processor buyers were active, along with a small number of restocker orders. Prices were generally firm across the market. Light weight lambs to the trade ranged from $96-$106, with light weight trade 2 and 3 score types ranging from $103-$113 to be firm in price. The small number of lambs purchased by restockers ranged from $73-$102. Trade weight 3 score lambs ranged from $106-$122, back $4, to average 540c/kg cwt. Heavy 4 score lambs sold firm from $128 to mainly $146, with one isolated sale at $165.