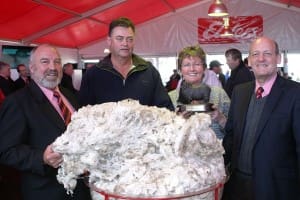 Wild dogs and bushfires have not kept Benambra woolgrowers Kelvin and Jackie Pendergast from their resolve to produce top wool.

After several wins in Elders monthly wool clip awards, the couple have won the prestigious Elders Southern Supreme Clip of the Year for 2013-2014.

“After having so many close ones it pretty amazing – I didn’t expect it really,” Kelvin said.

“We’ve always been there knocking on the door – the clip has always been up there, but we kept getting pipped at the post, I suppose.”

The Pendergasts were presented with the award by Elders chief executive officer Mark Allison at Hamilton’s Sheepvention expo.

Their winning 110-bale clip classed by Kelvin was 80 per cent 17.8 micron fleece wool, with a yield of 75.34 percent, length of 98mm, tensile strength of 41Newtons/kilotex and vegetable matter content of 0.2pc. The pieces yielded 71.60pc with a similar micron, strength and length. The oddments had a vegetable content of just 0.8pc.

Kelvin said the clip micron spread was small, from around 17 micron to 19.6 micron at the broadest for just four bales. The Pendarra clip weaner wool sold from 1050-1214c/kg last December and the AAA lines from the older sheep made from 1061-1074c/kg, apart from four bales of the broader fleece selling for 960c/kg. The bellies made 800c/kg and the pieces 867c/kg.

“But this year was outstanding.

“Doing very well in the required categories, but particularly in style and general presentation; the 110-bale clip caught the eye of a number of buyers.”

Mr Nicholls said despite fires and wild dogs, the Pendergasts have kept forging ahead.

China tour showed there was good demand for wool

Kelvin said his experience on a recent Elders wool tour to China had shown him that although woolgrowers might have to put up with current prices, there was still demand for wool.

“It was very encouraging that they would possibly need more wool in future years.

“There is always demand for wool, so hang in there everyone – it’s a good industry to be in.”

The Pendergasts’ daughter Nicole, her husband Ken and baby Olivia were also at the award presentation.

Kelvin said he had electrified their property boundary against wild dog incursions in 1997.

“We never had a dog in until we got burnt out in the 2003 fires and three days after the fires came through with the fences down the dogs were in killing sheep.

“So we got six or eight blokes in and got the fences back up and running, and touch wood we’ve never had a dog in since.”