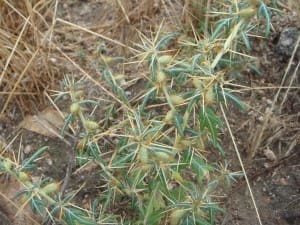 Tasmania is reviewing requirements for shearing and fleece length for sheep and tail length for cattle coming into the state following the discovery of Bathurst Burr infestations earlier this year.

Despite a Bathurst burr infestation in May this year being linked to Victorian sheep imported for slaughter, and other infestations being located, importers of livestock with wool or hair more than 25mm long can obtain a shearing exemption by declaring that the animals are clean and free from any grass, seed, or plant material contamination.

Tasmania is regarded as free of Bathurst burr, which is classed statewide as a Zone A weed requiring eradication. A burr infestation was also found in the state in 2009.

Bathurst burr has spread throughout Australia to be a problem in the wool industry for the past 150 years, with its control estimated to cost more than $81 million annually. Its sharp spines deter stock from grazing, the seedlings are toxic to sheep and the burrs contaminate wool.

No exemption required if wool is under 25mm long

The current exemption form on the Tasmanian Department of Primary Industries, Parks, Water and Environment website requires that if weed contamination is detected by inspectors on arrival in Tasmania the animals must be shorn or treated to remove the risk material.

“Where possible, (exemption form) application should be made at least five working days before arrival of animals.

“Animals will be examined by quarantine inspectors on arrival into Tasmania and charges will apply,” the exemption form states.

“If hair or wool length is less than 25mm, an exemption is not required.”

Invasive Species regional co-ordinator with the DPIPWE, Kiowa Fenner, said there was currently no requirement for sheep entering the state and going direct to slaughter to be shorn.

“There used to be, but there has been a blanket exemption, so that’s what they are reviewing at the moment, this exemption.

“Definitely there is a review being undertaken by the department in relation to fleece length and things like tail length and that sort of stuff on cattle.”

Burr surveillance will be increased

She said the DPIPWE encouraged good biosecurity for imported livestock with quarantine paddocks for 10-14 days to monitor and report any new plants that germinated, but surveillance will be increased around saleyards and slaughter houses that handle livestock from the mainland.

The majority of sites where the burr was found, other than on the initial property, were related to processing plants that had brought stock in from the mainland. Burr infestations were found at sheep-only and cattle-only processing plants, she said.

A Bathurst burr incursion into the state was halted earlier this year thanks to vigilant Longford farmer Bill Cox, who found the weed on his property after receiving Victorian sheep which were destined for slaughter within one week and hence hadn’t been shorn. Mr Cox didn’t recognise the weed and alerted the Tasmanian DPIPWE. The department wasn’t aware of the weed’s presence in the state before Mr Cox’s report.

“It was vigorous and coming into flower, so I thought I’d better find out more about it since weeds can be expensive to control when they get out of hand,” Mr Cox said.

DPIPWE staff were also able to trace back and find the Bathurst burr in other places the sheep had been, such as a truck wash and abattoir stockyards. They also used the National Livestock Identification System (NLIS) to identify other areas of Tasmania livestock had been introduced over the past few years, and discovered the weed in stockyards in Circular Head.

It shows how important quick action is in limiting the potential spread of pests, diseases and weeds and minimising the chances of them becoming widespread, she said.

“I’d encourage livestock producers to report anything unusual – know your property, know your livestock health status, and don’t worry about how insignificant it may be — small signs may be an early indication of a serious pest, disease or weed,” Dr Coad said.

Mr Cox said it only took one phone call to the DPIPWE invasive species branch and they were straight onto it. For more information about biosecurity in Tasmania, livestock producers are encouraged to head to http://dpipwe.tas.gov.au/biosecurity/