Coryule Merino stud continued its strong record at the Ballarat ram sale on Monday, selling the top-priced ram for $4400. 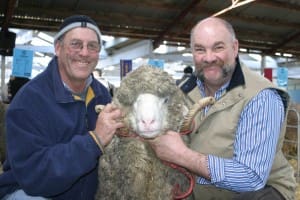 The Nerstane daughter stud based at Willowvale in Victoria sold five rams in the sale for an average of $2710, the highest result of the 10 studs that yarded sheep. It was the second time the stud has topped the sale in three years of selling rams at the Ballarat showgrounds.

Selling agents Elders and Landmark sold 38 sheep for an average of $1900, $60 down on last year’s sale mean.

Maroona woolgrower Bruce McDougall and son Sean paid the top price for the 19.2 micron ram to lift wool cut on their ewes at the family property Rosevale. Sean said he liked the ram’s length of staple and coverage. The ram’s sire the high production ram Nerstane 4636. The McDougalls run 6000 sheep, 300 cattle and crop about 400 hectares at Rosevale.

Coryule stud manager Craig Trickey said the 120kg September drop ram and sale result was indicative of the consistency and depth of breeding starting to show in the flock.

Landmark wool area manager John McGrath said it was a great sale result in the current climate and for the predominantly fine rams offered.