BALLARAT stock agency TB White and Sons has set a new Victorian record price for lambs of $300 as competition intensified among export processors for quality supplies.

Agents are expecting the strong saleyard prices to put pressure on processors to lift their over-the-hook prices. 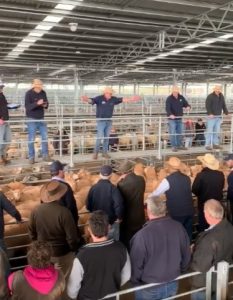 The price exceeded by just $2 the previous state lamb price record of $298 set at the Bendigo saleyards in August last year and bettered the Ballarat’s previous centre of $287 reached last week by lambs from TB White and Sons and Landmark clients.

The Maher lambs were estimated at 40-41kg carcase weight with a $10 skin, but Mr Bourke was expecting heavier lambs in coming weeks.

“Andy Maher has lambs coming in next week that will heavier than the one’s yesterday. 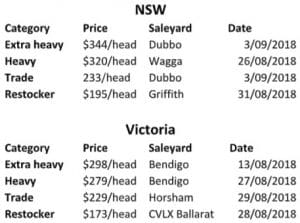 The Dubbo saleyards holds the national record for extra heavy lambs at $344 set in September 2018 and the Wagga saleyards achieved the highest heavy lamb price of $320 in August last year.

Mr Bourke quoted lamb prices as $10-$15 on all categories on Tuesday.

“There is plenty of weight in the lambs which is why you are getting the big dollars.

“The number of lambs around is definitely slipping; locally our numbers are pretty good for this time of the year, but I think the northern areas must be slowing down a lot.”

He said restocker have put a floor in the market with the lighter lambs, but trade and supermarket demand is strong.

Mr Bourke said the heavy lamb and trade lamb prices in saleyards were on a par with the over-the-hook rates, if not better.

Lambs prices also generally lifted in other major market this week, with the best extreme heavy weights at the South Australian Livestock Exchange at Dublin on Tuesday also setting a centre record of $274.

The yarding still had some quality heavy lambs off supplementary feed, with neat domestic and light weight lambs the most difficult to find. Quality overall was plainer with more small pen lots.

Prices were dearer, and the market gained momentum late in the auction as buyers tried to fill orders. Processor lambs over 22kg cwt gained $10-$20, with some of the best price increases recorded for heavy export pens. The supply of light weight stock was limited and store buyers could not operate like last week, which caused some price fluctuations.

The better bred and conditioned light weight lambs made $130-$155. The market showed a softer trend over some of the plainest small lambs, with quality a factor. Well-finished Merino lambs off supplementary feed and suiting domestic orders were dearer, reaching $207.

With fewer lines of heavy mutton available, buyers weren’t prepared to compete as strongly this week, which removed some of the extreme prices of the previous sale. Dollar per head results for heavy sheep remained impressive, at up to $233 for big crossbred ewes and to $218 for Merino wethers. Most sheep made $90-$150. Good mutton was estimated to have cost processors from 540-580c/kg.

The NLRS said lamb quality was average to good, with an excellent penning of heavy and extra heavy lambs. The usual buyers operated with more urgency in a mostly dearer market.

Trade weight lamb prices were $5-$10 head up on last week with the heavy and extra heavy lambs selling to $10 dearer or more in places, on weight. The extra heavy lambs reached $300 for a large pen of crossbred lambs estimated at 42kg cwt. Medium weight trade lambs, 22-24kg, sold from $184-$210 and averaged around 805c/kg.

The sheep quality was mostly good, but there were fewer wethers and more lighter Merino sheep. Heavy Merino ewes made to $168 and heavy crossbred ewes to $214. Sheep mostly sold to a dearer trend.

The NLRS said good numbers of well-finished lambs and some plainer types were offered. The usual buyers competed in the firm to dearer market.

Lamb quality was again extremely mixed. Many of the lambs were 2 score Merinos; however some medium and heavy weight crossbreds were in ideal trade condition.

Competition was extreme from the outset, with prices across the lamb sale increasing by $10-$15 and more in places. The best extreme heavy weights set a new saleyard record of $274.