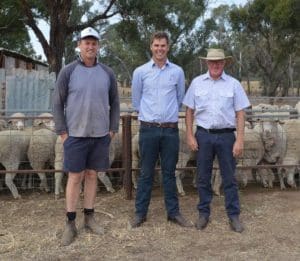 The 2018 Flock of the Year winner Nicholas Harrop of GE KM and NE Harrop, left, with judges Daniel Rogers and John Crawford.

A FLOCK of heavy Merino fleece cutters producing good lambs for meat and wool production has won the 2018 McLennan-McColl Flock of the Year.

The Glendonald blood-based flock of G.E., K.M. and N.E. Harrop at Muskerry east of Bendigo won the prestigious award from six other flocks this week, after two days of judging.

Seven flocks in the Bendigo, Ballarat and Serpentine areas competed for the honour, presented by The Royal Agricultural Society of Victoria in partnership with Merino Victoria.

Nick Harrop said the Merino flock has been based on Glendonald blood for 20 years.

“I just wanted to fill bales of wool and get size in them – meat.”

The 1000-ewe Merino flock averages about 7kg of skirted 19.5-20 micron wool per head each year, although Nick said he needed to work on the flock’s 90 percent lambing percentage. Any ewes classed out are joined to Poll Dorset sires.

Nick said returns from the Merino-Merino matings are exceeding those of the Merino-Poll Dorset joinings with the added wool value. His May-June 2017-drop Merino wether lambs cut $56 worth of wool in February and he expected them to reach carcase weights of 26kg by mid-May, when they are contracted over-the-hook for 620c/kg.

Nick said he was shocked, but privileged to be named the winner of the competition.

“It was a great experience and encouraging to see that we are on the right track with our breeding.

“Congratulations to all breeders who entered the competition and to RASV and Merino Victoria for organising the event,” Nick said.

The competition flocks were judged by John Crawford of Rock-Bank Merino Stud and Daniel Rogers of Mount Yulong Poll Merino Stud. The results were announced on Thursday at the Flock of the Year presentation dinner at the National Hotel in Bendigo.

Mr Crawford was impressed with the level-headed uncomplicated approach of Nick Harrop to flock management.

“He keeps it simple but uses all the most useful information at hand in making decisions.

”He’s a natural stockman and his sheep were presented in top condition.”

Mr Crawford said all the sheep entered in the competition were a credit to their breeders. Fellow judge Daniel Rogers congratulated all the entrants for having the courage to display their sheep to the public.

“The standard of sheep on display was fantastic and showcased the many strengths of the Merino industry.”

The Redesdale flock of Tom James, Coliban Estate, was placed second, and in third place was the flock of Fraser Lourie, GJ and ML Lourie, Raywood. The other entrants were S.J. & L.J. Poole, Berrimal; the McClelland family, Archdale; Kieran Floods, Shelbourne, and; Gourdie Farms, Woodstock West.

The competition is named in honour of two of the Merino industry’s most well-respected, wool producer, Neil McLennan, and sheep classer, Keith McColl. It celebrates and assists with improving the quality of Victoria’s Merino ewe flocks by allowing entrants and other producers to join athe judging tour. The award was supported by Merino Victoria, Landmark, Elders and RuralCo.