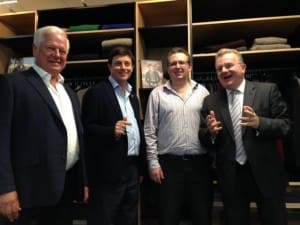 Hysport is wholly owned by wool marketing company AWN and is running 15 whole garment knitting machines almost 24 hours a day producing pure and wool-blend garments with space for 40 in the new factory.

Hysport’s sales focus has previously been on marketing garments into fashion and tourism stores in Australia from a factory at Seaport, but AWN managing director John Colley said the first export focus will be on Merino-possum from the Carrum Downs plant.

“It won’t be on pure wool, and we are going to focus on marketing the brand – Merinosnug – in English-speaking countries.”

“It is yet to be decided whether we will use the wool blend mark on any of the products.”

He said marketing will be based around the attributes of the products and their suitability for indoor and outdoor wear.

“Which are basically that it is 40 percent warmer and 60 pc lighter than pure wool – the blend.

“We believe because possum has a fairly finite supply from Tasmania and New Zealand and is not available anywhere else in the world, it can be marketed at the top end,” he said.

“Possum (hair) is integral, it makes it work, whether pure wool or diehard wool people like to hear that or not, the reality is that wool blends sell more wool.”

Mr Colley said he was about selling all sorts of wool.

“The more wool you sell, the better the price is, the more it drags through.”

Hysport chief executive Rod Murray said since AWN took over Hysport 15-16 months ago, garment sales – from gloves to jumpers and jackets — have increased more than 10 percent.

“We’ve increased production capacity in the last four months by 25 percent and we’ve got plenty of room to still grow.

“Basically the machines are going 24/7 – we stop the night shift at midnight and everyone goes home and the next shift comes in at 7.30am the next morning – there are 7.5 hours when non-one is here, but the machines keep running.”

About three quarters of the 1750 square metre factory is being currently used – the old factory was about 570 square metres – with 32 staff, up from about 25 employees.

He said there were only three manufacturers using whole garment knitting machines in Australia and only two using wool.

As a young man he said he wore his Hysport jumper to impress his early girlfriends.

“I was surprised when the Castle was being filmed that there wasn’t a moment when not only did they go into the good room but they wore their good clothes… and in the 80s that was wearing your Hysport jumper.

“We’ve seen it in the winter Olympics, we’ve seen it in iconic images with the America’s Cup, we knew it was a premium Australian product made with love and with a distinction that even saw a lemon yellow version of the pull-over that actually looked horrendous,” he said.

“But the fact that it came from Hysport and you could just see the Made In Australia brand – it was an outfit for the times.”

Mr Billson said the nation is appreciating that high value manufacturing with an authentic story connects with consumers, including tourists, who love the “authenticity” behind the Hysport garments.