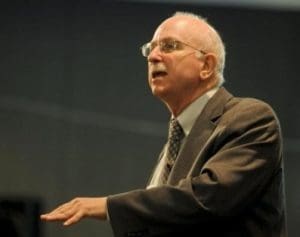 But Dr Sandman believes that making a case that the way to sustain the wool industry’s social licence by shrugging off animal welfare controversies and selling lots of wool is “wrong-headed.”

However, the United States-based risk and outrage communications expert supported AWI corporate communications manager Marius Cuming’s advocacy of research on issues like mulesing pain relief and his assertion that every farmer in Australia should be an animal welfare activist.

“This is exactly right.” 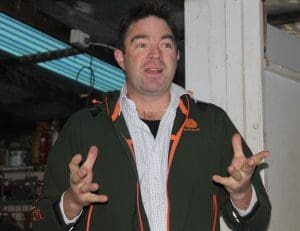 “You will never, ever, ever, win a fight with your mother-in-law, and if you think you’ve won it, you’ve still lost it, haven’t you? Mr Cuming said.

He also said animal rights activists lose every time a woollen garment is sold, so selling products was “the most important thing to do” and having a profitable industry was a great way to keep a social licence strong.

“While I don’t much like mother-in-law analogies, I accept Cuming’s point that when people are criticizing an industry, there is no such thing as “victory” – so in most cases a company or industry that sets out to defeat its critics will only make things worse.”

“While I don’t much like mother-in-law analogies, I accept Cuming’s point that when people are criticising an industry, there is no such thing as “victory” – so in most cases a company or industry that sets out to defeat its critics will only make things worse.”

“It is both fair and effective to say so.

“When you’re under attack by an animal rights group that believes (for example) that sheep can’t give informed consent so all shearing is a kind of tyranny and oppression, it’s useful to distinguish such groups from animal welfare groups, which believes only that humans have a moral obligation to do what they can to minimize animals’ pain,” he said.

“In that sense, it’s helpful to point out to customers that their choice is stark: If they like woollens and intend to keep buying or using woollens, they have to be okay with not waiting till the sheep give their informed consent.”

But Dr Sandman said making the case that the way to sustain the wool industry’s social licence to operate is shrug off animal welfare controversies and sell lots of wool was “wrong-headed.”

“For most purposes, people don’t “need” wool; they like it, but can live without it.

“The market for woollen garments is sufficiently discretionary that sales could go down markedly if large segments of the public came to see the industry as indifferent to serious public concerns,” Mr Sandman said.

“By contrast, the market for petroleum is comparatively immune to the commercial impact of public disapproval.

Dr Sandman disagreed with Mr Cuming’s advice to not talk about mulesing, referring to the communications manager’s advice that talking about the practice would not lead to any more wool or wool products being sold.

To talk or not to talk — about mulesing

“What about the uninterested public?” Mr Sandman asked.

“When Cuming says that industry spokespeople shouldn’t talk about mulesing, he presumably has in mind an audience that isn’t paying attention to mulesing already.

“Addressing the issue genuinely does have two downsides: (a) cluing in the previously unaware portion of the public; and (b) reminding those who have heard about the controversy, but put it out of their minds,” he said.

“Addressing the issue also has two upsides: (a) Ameliorating the concern of the portion of the public that is already aware of mulesing and would like to think the industry is trying to minimize animal pain; and (b) “inoculating” the portion of the public that isn’t yet aware, so that when critics raise the issue they have a pre-existing sense that the industry is responding responsibly.”

“If the critics are impotent or incompetent and few if any Australians will ever hear about mulesing, the downsides of addressing the issue exceed its upsides, and Cuming is right to focus on selling wool rather than responding to critics,” he said.

“On the other hand, if the critics are already reaching a lot of Australians and are quite capable of mounting an effective campaign, then addressing the issue is wiser than avoiding it.”

Dr Sandman said it is “way, way wrong” to suggest that there’s no reason for the sheep and wool industry to address issues like mulesing – which is an animal welfare issue, not an animal rights issue.

Dr Sandman said an industry could only make the point – ‘If mulesing were entirely abandoned by the Australian wool industry, animal rights activists would not slacken in their commitment to put a stop to sheep-raising, whether for food or fibre’ — if it was visibly taking animal welfare concerns to heart.

“The core question here is whether and where you dichotomize.

“Animal rights activists want to dichotomize in a way that isolates the sheep industry: sheep industry people who abuse animals versus the rest of us who are humane,” Dr Sandman said.

“(Mr) Cuming wants to dichotomize in a way that isolates the critics: extremists who think animals have the same rights as people versus the rest of us who are sane.”

Dr Sandman said the industry should therefore have two goals vis-à-vis the mulesing controversy and others like it:

Low profile vs acknowledge and improve

Dr Sandman said generically, there are only four ways to respond to criticism:

Dr Sandman said much of what Mr Cuming said suggests that he thinks the critics of mulesing have a good deal of power and impact.

“That’s why he has ruled out “defend” and “counterattack” – he thinks (rightly, I believe) that the industry can’t win a fight with its critics.

“Then he seems to conclude that the “low profile” option is the only one left,” he said.

“I don’t see why he is ruling out the “acknowledge and improve” option – the option most clearly supported by the facts as he describes them.”