AUSTRALIAN Wool Innovation’s inclusion of 2.5 percent as the supplementary rate in the coming WoolPoll levy ballot has been branded as unnecessary and unjustified.

Under the Wool Services Privatisation (Wool Levy Poll) Regulations 2003, AWI is able to add a supplementary levy rate to the legislated levy options, and it can separately recommend a preferred rate to levy payers.

Sheep Central was told by an AWI spokesman yesterday that the board has not yet decided on the rate it will recommend to levy payers. Any recommendation of a particular levy rate has to be made in a stand-alone document, which could be included in the WoolPoll voting pack.

WoolProducers Australia president Ed Storey said putting 2.5pc as a levy option indicated AWI board members “continue not to listen and it continues to be about them as directors.”

“So to put another option that caters for a tiny section of the levy payers indicates the board is not listening to levy payers,” Mr Storey said.

Mr Storey said he “pretty sure” AWI has opted for a 2.5pc supplementary option to ensure that 2pc isn’t the highest on the 2021 ballot paper.

By putting the 2.5pc option in, Mr Storey agreed it looked like AWI’s preferred option in the 2021 ballot will be 2pc.

“It indicates they are going to use the setting of the options to try to influence the final outcome, which is a disappointing use of their discretionary powers in respect to setting another levy option.”

2.5pc had never been a realistic option – AWGA

Australian Wool Growers Association director Robert Ingram said for most wool growers 2.5pc has never been a realistic option in a WoolPoll ballot.

“That vote (greater than 2pc) has been decreasing forever, so to me, this is actually wasting shareholders’ money yet again, developing an argument to justify 2.5pc.

“The very comprehensive WoolPoll Review set out a clear framework as to what the four rates should be and if AWI wants to put in a supplementary rate they can,” he said.

He said past WoolPoll voting figures showed that wool growers have never substantially supported a levy rate above 2pc and a 2.5pc option could not be justified in terms of past voting preferences.

“It just shows again the arrogance of the board in not looking at what wool growers are telling them in terms of the number of votes.

“The culture of the organisation in terms of the way it treats its shareholders is appalling.”

2.5pc is not a superfluous option – AWI

An AWI spokesman said the five options provide wool growers with a wide variety of levy rates to consider.

“Wool growers will make up their own minds on what to support.

“It (the 2.5pc) is not a superfluous option,” the spokesman said.

Now you see them, now you don’t

Sheep Central was told yesterday afternoon by AWI that the AWI board had decided “today” on the WoolPoll supplementary rate of 2.5pc, despite also later confirming that the levy option had been declared in the draft WoolPoll papers that were prepared weeks ago, but not released publicly.
Sheep Central was also told growers looking at the WoolPoll website had seen the 2.5pc supplementary option included in the levy options on Thursday morning, before the board’s decision was disclosed to media, but the options were then taken down, before being put back up again later in the day. 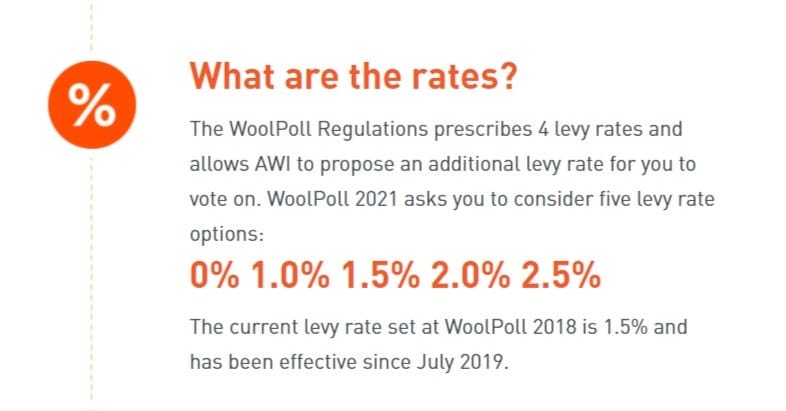 The WoolPoll rates – now you see them. 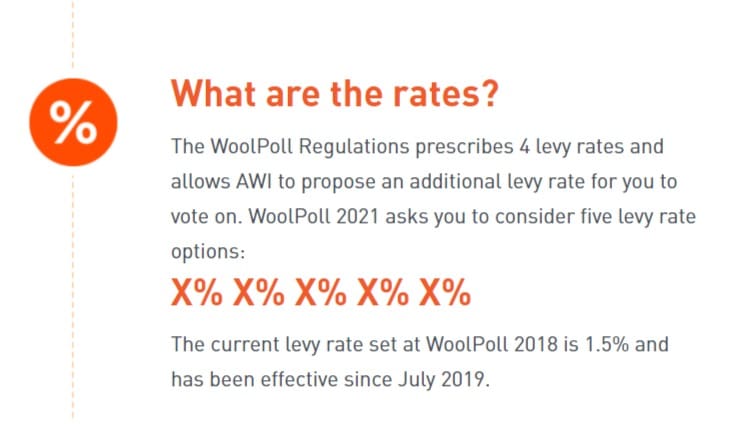 The WoolPoll rates – now you don’t.