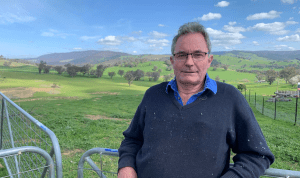 “AWI firmly believes the design has an important role to play in solving the shearing crisis.

“We look forward to working with Grant on investigating its commercial possibilities,” he said.

Mr Roberts was among several AWI officers who inspected the Burbidge system in action, including chairman Jock Laurie, and fellow directors Don Macdonald and Michelle Humphries.

Mr Burbidge said he finished shearing about 28,000 Merinos on the platform/cradle system on Monday, after starting in August last year.

“They told me they were impressed and they would like to do something.”

He was told AWI would come back to him with a plan.

Training shearers is also the key for platform shearing

Welsh backpacker Sian Pierce at work in the Burbidge woolshed in 2015.

Recently he has been employing “learners,” including a 19 year-old man he shore his first 100 sheep in a day just five weeks after picking up the handpiece for the first time. As of today, he said he only had three shearers currently available to shear on the system and this would come back to two next week.

“Training is the key, he said.

Mr Burbidge said the shearing platforms or cradles are easily manufactured, and he is now building adjustable versions for different sheep sizes.

“Originally, we only had one mould, one size, but if you are going to shear big composite sheep you need a wider cradle, so we’ve made an adjustable one.”

He said the next step for him is to make moulds for the adjustable cradle versions.

Mr Burbidge said to further development the system, the adjustable cradle moulds need to be made up and portable four stand trailer-mounted shed needs to be built.

“You could shear anywhere then.

“The best thing about our system is that we have only just started modifications,” he said.

“There is huge potential to develop it further to make it easier to hold sheep, simplify blow patterns and improve wool handling.

“I have numerous ideas that we haven’t trialled yet and I am sure other people will further develop it once they have had a crack at using it.”

Mr Burbidge agreed that the shearer shortage is impacting producer decisions on what type of sheep they ran but there was also a lot of angst in the industry over the issue.

“You’ve got a situation now where a lot of the shearers are working seven days a week.

“My wool broker said all they are doing is getting cranky; they are not shearing any more sheep than they would if they only shore five or 5.5 days a week,” he said.

“Everybody is cranky and there is a lot more antagonism between shearers and wool growers now and it is starting to get ugly, though it may not be everywhere.”

Mr Burbidge said the industry is also working on different pay rates for shearers, with one local teams was advertising shearing at $6 a head and in other areas the rate was $4 with accommodation paid.

“I don’t know what the answer is.

“Our system is certainly suitable to shear some sheep, though crossbred lambs are not easy to shear on it, but if you are experienced it is not that difficult,” he said.

“Our system is part of the solution, it’s not the total solution.”

Click here for more information and videos about platform shearing on Burbidge Farms.