This is a 40pc increase year-on-year from the $87 million in extra sales generated by AWI campaigns in 2020.

Double 11 is also known as Singles’ Day and is an online shopping festival held on 11 November in China. Double 12 is held on December 12, which is known as ‘Couples’ Day.’

AWI’s acting chief executive John Roberts said the results underline the importance of promoting our wool to major consumer markets around the world.

“This is more proof of AWI delivering strong results for Australia’s wool grower by tapping into the world’s most lucrative fashion market – China.

“The biggest selling items were in womenswear, including knitted sweaters and cardigans,” he said.

Mr Roberts said the latest campaign highlighted the premium natural qualities and effortless style of Merino wool – all with the aim to make Merino wool the most coveted apparel fibre for consumers during China’s 2021 winter.

“Planning is already underway to build on this success and to create even more demand for Australian wool.” 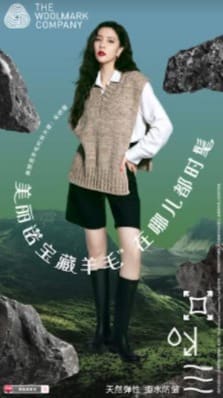 TMALL is part of Alibaba Group and is the most visited business-to-consumer online retail website in China, accounting for nearly half of all retail e-commerce sales.

The Woolmark Company also worked with the No.1 livestreamer in China, Viya, to host a livestream event on 27 September, which was especially popular. Brand partners included: MO&Co., Lily, Eifini, GXG, Dazzle, Edition and Banxiaoxue.

AWI said the purchase intention for Merino wool has significantly increased, and the percentage of consumers who have higher intention was 87.1pc, up by 22.4pc from the previous year.