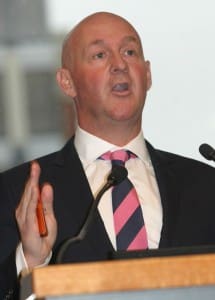 At the AWI annual general meeting in Sydney on Friday, wool growers were told the AWI board would receive the WSSR panel’s final report next month.

The report would be considered at the AWI board’s January 2016 meeting and be released without change to wool growers in February next year.

“They (the board members) won’t change it,” he said.

Despite an industry backlash to his earlier claims of a lack of modernisation and digitalisation in the country’s auction-based wool selling system, at the AWI annual general meeting Mr McCullough again vigorously defended the AWI review.

“It is our job to do this; it is what wool growers ask us to do.

“We reason we wanted to do this is it made no sense that 95 percent of the Australian wool clip is sold through an open cry auction system.

“It made no sense to me that to do that you had to go out and register and sit in a room in Brooklyn or Parramatta and bid with your hand on a bale,” he said.

Despite the active AuctionsPlus Wool and Wooltrade online platforms, Mr McCullough said he couldn’t see any great evidence of any digitalisation in the selling of wool in Australia.

“There has certainly been some innovation when we went from viewing bales of wool to viewing boxes of wool in 1973, that was significant in 1972 – but I couldn’t spot much else that had happened since 1973.

“I’ve been criticised for that; some people have said the motor car has still got four wheels, we still use it,” he said.

“But a horse and cart has four wheels as well.”

Mr McCullough said he was really pleased that AWI had done the WSSR.

“I also thought that they deserve to understand all the costs that are going into that transaction – whether they are being charged directly on their invoice or charged indirectly through a discounting of the limits.”

Mr McCullough said woolgrowers ended up paying for most of the costs associated with selling wool.

“They end up coming from you in one form or another.”

To ensure AWI was kept at arm’s length from the review — “a little independent, in fact a lot independent” — Mr McCullough said AWI appointed the review panel, chaired by former chairman of the Australian Competition and Consumer Commission Graeme Samuel.

Mr McCullough earlier this year stated AWI was prepared to fund an online Wool Exchange Portal aimed at increasing competition and transparency in wool selling, as recommended in the WSSR’s discussion paper.

Panel member Will Wilson said the AWI board had been “totally allowing” the WSSR panel members to draw their own conclusions.

“And we’ve been very grateful for that.”