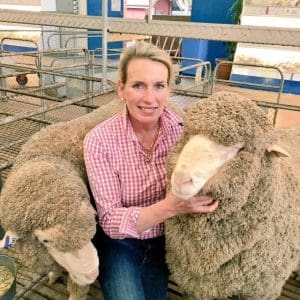 However, she said the campaign was not be simply about selling more rams, and will also target commercial sheep producers.

“We all need each other.

“The Merino ewe underpins the Australian sheep and meat industry and it is such a wonderful versatile sheep.”

The campaign will run for about three years and will involve the release of case studies in print, online and social media – “good positive stories about people who are out there making a lot of money out of Merinos,” she said.

Campaign will focus on ‘facts and figures’ for young farmers

It is the first national, industry-supported campaign of its type in the Merino industry and will target the whole supply chain, from producers to exporters, to ensure there is a critical mass of the meat and wool that is integral to the industry, the AASMB said.

Mrs Wallace said her hope is that young farmers will examine the “facts and figures” of Merinos and increase numbers, retain older ewes or graze rather than crop land, although buying into sheep would be difficult at current prices.

The Merino stud breeders are also concerned that in the last 25 years since the floor price scheme crashed a generation of farmers have left wool-growing to go into other enterprises.

“It is going to be a slow process, it’s not going to happen overnight.”

“We know that Merinos have the capacity to outperform other livestock enterprises and be competitive with returns from grain-growing enterprises,” she said.

She said Merinos are very comparable, it not more profitable, than many other enterprises with less risk and huge range of options.

“We are now breeding a more easy care Merino that cuts plenty of wool, has a larger carcase size with good fertility; all those things add up to dollars in your pocket.”

“There are many producers achieving outstanding financial returns in terms of dollars per dry sheep equivalent or per hectare through best practice flock management and business planning,” Mrs Wallace said.

“For example, for Tasmanian producer David Taylor – who benchmarks his operation through Holmes Sackett – Merinos are generating an income of about $70/DSE for wool, compared with $60/DSE for prime lamb and $50/DSE for beef, while in the six-year sheep profitability trial at Elmore, Victoria, Merinos had the highest dollars per DSE return at up to $70, compared to other groups at up to $61.”

“We need to get out there and beat the drum for our industry because there is nobody out there doing it for us.”

Merino ewe flock at a critical level, polls taking over

At the World Merino Insight conference the day before, Mrs Wallace said the AASMB represented just under 1000 members in six states.

She said there were just under 70 million sheep in Australia, down from 180 million in the 1990s, “a huge drop by any standard”.

“These figures concern our association greatly and are affecting our industry,” she said.

“The Merino ewe underpins the Australian sheep and wool industry and total numbers now are at a critical level.

“Registered stud numbers nationwide are sitting at approximately 960, about 100 less from a year ago.”

Generally ram sales from all these studs nationwide have been declining in the past 25 years, she said.

The AASMB predicts that within the next 12-18 months the number of registered poll sheep will overtake their counterparts.”

“So there has been a big swing to poll Merinos Australia-wide, which is not surprising, and it looks as though this trend will continue.

Mrs Wallace said many wool growers found that due to poor returns they had to change their enterprise mix to survive since the 1990s.

“But now things have changed for the better.

“I don’t think we have seen more positive indications within our industry.”

The current wool, surplus sheep and lamb market are at all-time highs, presenting fantastic opportunities for farmers, she said.

“Supply is equalling demand in the wool market now with the Eastern Market Indicator steadily increasing now for the past two years.

“Surplus sheep sales are set to soar, with shortages of supply and good seasons now across Australia in most districts.”

The lamb market continues to boom and ram sales will be buoyant too, Mrs Wallace said.

“So there is no better time to get back into Merino and increase Merino numbers – there is good money to be made.”

Campaign sponsor Australian Wool Innovation chief executive officer Stuart McCulloch said the organisation was quick to support the campaign because of the need to increase the Merino ewe flock to take advantage of the enormous global fibre and food opportunities in the future.

“To do this, Australian Wool Innovation has made the strategic decision to focus heavily on increasing the reproductive efficiency of the Merino with the aim of lifting the average weaning rate in Merino-to-Merino joinings by three percent in the next three years,” he said.

ProWay Livestock Equipment director and stockyard designer Joe Hoban said the Merino ewe is the backbone of the Australian sheep industry, operating in a range of climates and geographic locations across Australia.

“She fits into a number of different agricultural operations from mixed farming to dedicated wool growing, and from large scale pastoral operations to prime lamb production.”

The campaign has the support of all the state Merino stud breeder associations and more sponsors will be announced. More information is available at www.merinos.com.au