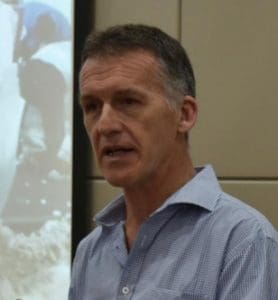 THE Australian Wool Exchange has rejected calls from brokers and exporters to extend the submission period for the National Wool Declaration review.

And the review submission period ended on 6 April without the Australian wool industry being able to consider the final report from preliminary research into the sheep freeze branding process.

The review was called by AWEX as part of a commitment to review its position on sheep freeze branding, which is currently defined as a ‘non-mulesed’ process on the National Wool Declaration.

However, the National Council of Wool Selling Brokers of Australia sought a further extension of the review’s submission period until late May to allow consideration of the sheep freeze branding research results. This was supported by the Australian Council of Wool Exporters and Processors.

When asked on April 6 why AWEX had rejected the NCWSBA request, AWEX chief executive officer Mark Grave said AWEX had made the timing of the 2021 NWD review known 12 months ago, in March 2020.

“The commencement of this review is in keeping with AWEX’s commitment to members and industry and AWEX felt this a reasonable and well publicised time frame.”

The peak grower body, WoolProducers Australia, also believed the current NWD review was premature, but Mr Grave refused to say whether this had been considered by the AWEX board.

“All submissions to the 2021 NWD Review, and issues raised, are made in confidence.

“AWEX has not reviewed any submissions, as the submission period is still open,” he said.

Mr Grave reiterated that the review will have a particular focus on the identification of wool from sheep treated with liquid nitrogen “and, in addition, AWEX called for submissions to include any new or changed issues for consideration”.

However, later that day Mr Steinfort told Sheep Central he had included the research report with his NWD submission on 6 April, and had placed a request this morning to the University of Melbourne to see if and when the final research report can be released publicly.

He said AgVet Innovations had only received the final report from the University of Melbourne after the close of business on Easter Thursday 1 April.

“I had yesterday only to review the report and submit with my own (AWEX NWD) submission.

“We promised the AWEX board last year we would do all within our means to bring some scientific evidence and data regarding the freeze branding process,” he said.

“We have delivered on this and only just in time.

“Until I hear confirmation back from the uni in regard to publication and release under our contractual arrangement, I’m not able to make further comment.”

On April 7, Dr Jongman told Sheep Central that the final report from preliminary sheep freeze branding research had been sent to AgVet Innovations, the funder of the project.

“They will submit the report to AWEX.

“I am not sure if they will make the results available to the general public prior to publication in a scientific journal,” she said.

“For further questions it is best to contact AgVet Innovations.”

Dr Steinfort did not reply to a further question on whether the decision to release the results publicly is his or the university’s to make, or whether it had to be a joint decision.