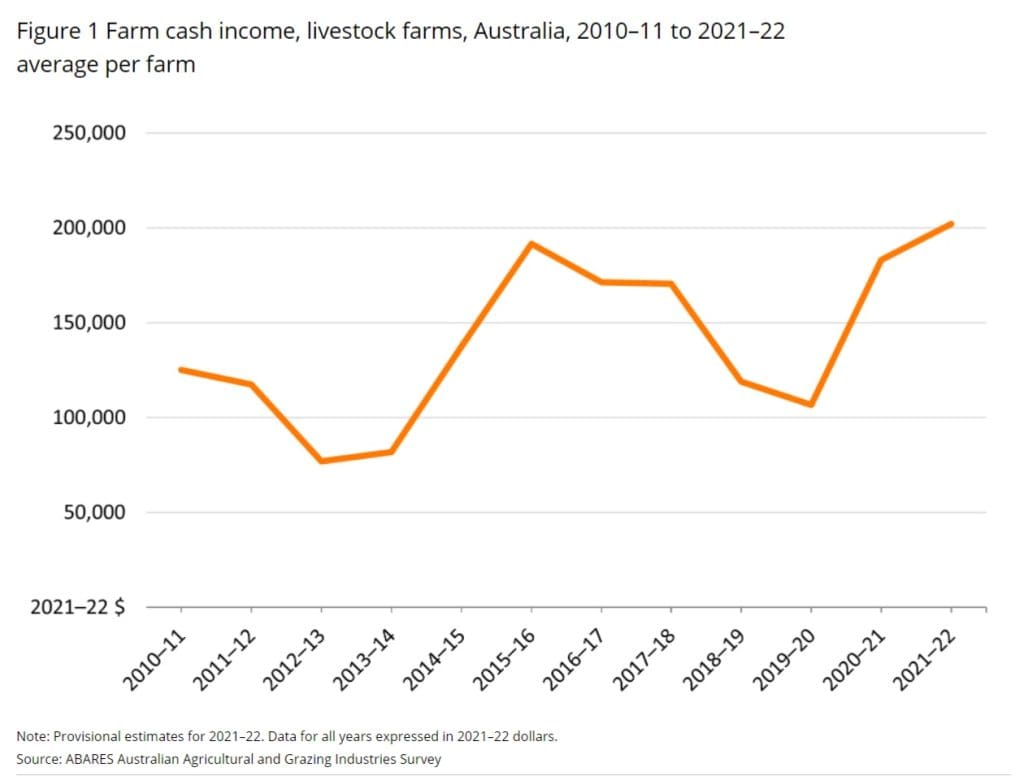 AVERAGE cash income for sheep specialist farms is estimated to have decreased slightly in 2021–22 to $115,000 per farm as high meat prices offset fewer lambs sold for slaughter, according to the latest ABARES analysis.

However, ABARES said the sheep farm result remained 3 percent above the average in real terms for the previous 10 years.

The average rate of return (excluding capital appreciation) for sheep specialist farms is estimated to have been 1pc in 2021–22, in line with the long-term average.

The sheep results contrasted with an average farm cash income for specialist beef farms of about $255,000 in 2021–22, around 90pc above the average in real terms for the previous 10 years.

However, ABARES said despite higher incomes overall, a number of cattle farms in south-east Queensland, the Alice Springs region of the Northern Territory and the Pilbara of Western Australia recorded incomes below the longer-term average. This appears to have mainly been a result of herd rebuilding and reduced sales of cattle.

The average rate of return (excluding capital appreciation) for beef specialist farms is estimated to have been 2.5pc in 2021–22, higher than the 10-year average of 0.6pc per farm, ABARES said.

ABARES said an estimated 38pc of Australian farm businesses are classified as broadacre livestock farms (34,000 farms), of which 19,500 were beef specialists, 10,000 were sheep specialists, and around 4500 produced a mix of beef cattle and sheep (see Methodology).

High prices for beef cattle and sheep are projected to have offset fewer sales of finished livestock, with many farmers continuing to rebuild herds and flocks since the drought (Figure 1).

ABARES said the timing of purchases of inputs and sales of livestock during the year is likely to have influenced the results observed on individual farms given the fluctuations occurring in the market.

The percentage of livestock farms with negative net income in 2021–22 is estimated to have been around 12pc.

The average rate of return (excluding capital appreciation) for livestock farms is estimated to have been 2pc per farm in 2021–22, above the 10-year average of 0.7pc.

“We can put this down to higher receipts from wheat, barley, oilseeds, and grain legumes.

“That said, prices are higher for farm inputs such as fuel and fertiliser, and this has affected returns and will do so even more into 2022-23,” Dr Greenville said.

“Over the long-term, average annual productivity growth in the broadacre industry was 1pc, and 1.3pc in the dairy industry,” he said. Financial performance of cropping farms 2019–20 to 2021–22 can be read here: https://www.awe.gov.au/abares/research-topics/surveys/cropping

Financial performance of livestock farms 2019–20 to 2021–22 can be read here: https://www.awe.gov.au/abares/research-topics/surveys/livestock

The Australian Agricultural Productivity 2020-21 dashboard can be accessed here: https://www.awe.gov.au/abares/research-topics/productivity/agricultural-productivity-estimates

The Disaggregating Farm Performance Statistics by Size dashboard can be accessed here: https://www.awe.gov.au/abares/research-topics/surveys/disaggregating-farm-size