AUSTRALIA’S largest sheep and wool show starts in Bendigo on Friday with more than 3000 sheep from 30 breeds, the nation’s largest fleece display and the opportunity to shear a sheep and tour a farm in virtual reality.

At the 142nd Australian Sheep and Wool Show, the public will be able to watch nation’s top shearers compete, including members of the Australian team.

And Tim Gentle from Think Digital will also give people an opportunity to shear a sheep in augmented reality in the Careers and Technology Hub, bringing education into the digital age.

Thousands of farmers, traders and members of the public will converge on the Prince of Wales Showgrounds in Bendigo from July 19 to 21 to celebrate the best quality sheep genetics, discover the latest innovations and showcase the industry’s important and diverse contribution to everyday life.

“Despite widespread drought across Australia, we anticipate sheep and fleece entries to be on a par with previous years that have drawn around 3000 live sheep from 30 different breeds.

“This year, we have more Merinos displaying than in any of the past five years,” she said.

“We also have almost 450 individual trade sites and in that respect, we are full – there is virtually no space left anywhere.”

The feature breed is the Polwarth – developed in Victoria during the late 1800s from Lincoln and Saxon Merino bloodlines – coinciding with the centenary of the Polwarth Sheep Breeders Association of Australia.

It is the 20th year the show has been staged in Bendigo, bringing economic benefit to the community and providing a top-class venue for stakeholders to network with their peers. Features include the Australian Fleece Competition and judging to determine sheep champions, including the Supreme Prime Lamb, Supreme Long Wool and the Merino National Pairs.

Other highlights including Woolcraft, shearing and wool handling competitions, twice-daily fashion parades, the Festival of Lamb culinary experience, the sold-out Women of Wool luncheon and the Lambition dinner on Saturday night.

The main arena will feature yard dog trials, an animal nursery, the Careers and Technology centre and various stallholders. Other features around the show grounds include the Country Living and Lifestyle, Osborne and Noble pavilions and boutique stalls in the Woolcraft sheds, which form Australia’s largest fibre market.

Ms Falconer said visitors to the show can plan their itinerary with the help of a new Sheep and Wool Show app, while those unable to make it in person can watch the ram sale and some sheep judging via livestreaming.

“We believe we are only the second sheep show in the world to have a dedicated app.

“But we want, people to have all the information at their fingertips so they get the full benefit of the show and don’t go home later realising they have missed something.” 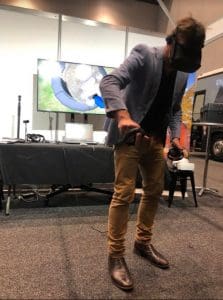 Visitors to the Careers and Technology Hub at the Australian Sheep and Wool show can tour a 360-degree digital farm, try their hand at clipping fleece and inspect an augmented reality ram, thanks to special cameras, headsets and videos providing immersive agriculture experiences.

“Farm VR is designed to encourage kids to jump into a career in the agriculture industry,” said Tim Gentle, from hi-tech ag-education firm Think Digital.

“We use this technology to get them excited.”

Mr Gentle will bring his retired passenger bus retrofitted with digital devices to the show, allowing patrons to get an authentic view of farm life and a better understanding of the food chain.

“With our Lamb Paddock to Plate VR experience, they learn where their food comes from,” Mr Gentle said.

“We take them from the farm to the sale yard and processing plant, then we cook the meat.

“In the virtual farm, they first watch a 360-degree video, then use hand controllers to try virtual shearing,” he said.

“Then they take off the headsets and use smartphones or augmented reality wearable devices and they’ll be able to see an augmented ram we are selling.”

The CT Hub on the main arena will include seminars, discussions and practical demonstrations of the latest in digitisation, virtual and augmented reality, drones, robots and other interactive equipment.

Australian Sheep Breeders Association president Rob McCartney said there is much to celebrate at the show, with persistence paying off for Australian sheep producers, as strong prices and market demand allow those who persevered through tough climatic conditions to reap the rewards.

Mr McCartney said the show is the sheep breeders’ chance to showcase the sector on the national and international stage and share knowledge within its ranks and with consumers in the wider community.

The show features the best animal bloodlines from around the country, as well as quality by-products formed off the sheep’s back: from food and fibres to craft and catwalk creations, he said.

“Competition will be fierce on the fleece tables, in the show ring and the Woolcraft sheds, and during crowd favourites like the working dog, shearing and wool handling championships.

“A bold focus on the future is evident throughout the Show, starting in the Careers and Technology Hub where youth can discover the diverse pathways available in agriculture, and the latest electronic and augmented reality tools that make farming more productive and less arduous are on display.

“The talents of our next generation are further fostered through the Future of Farming junior competition, Young Stud Masters’ Muster networking night and Young Voices from the Land seminar series.

“Our event is the largest of its kind in the world, with 30,000 patrons passing through the gates to see 3000 live exhibits from 30-plus breeds, and more than 400 site holders displaying products, services, technologies and opportunities linked to the humble Australian sheep.”