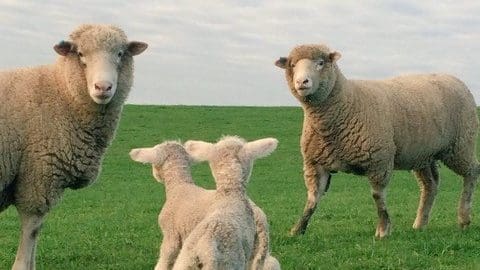 AUSTRALIA’S sheep flock is expected to rebound to more than 68 million this year as more ewes and ewe lambs are retained for breeding, encouraged by stronger meat and wool prices.

Meat and Livestock Australia today said Australia’s sheep flock continues to undergo a significant rebuilding phase and is predicted to grow by 6.3 percent to 68.1 million head this year. This follows the flock falling to its lowest level on record in 2020, at 64 million head, after years of drought.

Favourable seasonal conditions for the first half of 2021 coupled with a positive outlook will result in a faster national flock rebuild, according to Meat & Livestock Australia’s (MLA) 2021 sheep industry projections half year update, released today.

MLA has forecast that the national flock could reach 75.4 million by 2023. The last time the flock was this large was in 2013. A flock of 75.4 million head would be 18pc higher than 2020 levels. State flock numbers and producer intentions are expected to come from the current Australian Wool Innovation-MLA survey due to end on 30 June.

MLA market information manager, Stephen Bignell, said the speed of the rebuild was also a result of lower than previously expected sheep and lamb slaughter in 2021.

“Lower slaughter numbers for sheep and lamb, which MLA are now forecasting to be 6.1 million head and 20.3 million head respectively, are being driven by continued good weather in key sheep producing regions.

“Despite being revised down from the February projections, lamb slaughter is still expected to be above levels from last year, when 20 million head were slaughtered.

“In 2020, lamb processing capacity in Victoria was impacted by COVID-19 social distancing measures in the latter half on the year,” he said.

“Therefore, it is expected that lamb slaughter could accelerate in the second half of 2021 and exceed 2020 levels.”

Mr Bignell said average national lamb carcase weights will continue to be underpinned by improved seasonal conditions across key sheep regions and relatively high prices in the first quarter of 2021 that are providing producers with an incentive to add additional kilos to animals.

“Better conditioned lambs will see average national lamb carcase weights for 2021 lift marginally to 24.4kg, up 0.4kg/head on 2020 levels. MLA has not predicted significantly increased weights in 2021, given 2020 was also a year with abundant feed that assisted good lamb growth.

“Continued feed availability is underpinning average sheep carcase weights which are expected to remain in line with 2020 weights at 25.8kg/head. Greater investments into sheep lot and containment feeding during the 2018-19 drought supported carcase weights in periods of pasture shortfalls.”

Saleyard prices in 2021 are expected to remain high, though slightly lower than the records set in 2020 and 2019, indicative of a flock rebuild that is maturing.

As the predictions suggest, the sheep flock is in good shape to rebuild and grow, which will help Australia continue its position as a global export leader now and into the future.