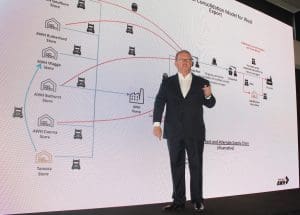 AUSTRALIAN wool growers and classers will soon have three electronic specis to choose from, but at least one provider has questions about supply chain compatability.

AWH chief executive officer Michael Jones said more functions had been added to the company’s eSpeci app, but it could be available within weeks. The app would include an ability to photograph a paper speci and send it to AWH, and a wool book that can be exported in various forms or converted into an eSpeci.

He said AWH developed an eSpeci to get advance notice of consignment details, because 62 percent of its wool arrived without paperwork.

“We don’t care about anything other than we want the information on an eSpeci – we don’t care whether it is on WoolQ’s or AWEX’s or ours, but I think it is crazy that there are three different ones going out there.”

Mr Jones said because of the amount of Australian wool handled by AWH for brokers, any eSpeci had to be in a format that suited the company’s systems.

“That’s part of the problem with WoolQ, they have spoken with us and asked us what type of data format we would like to get it in, but they haven’t worked out exactly how they are going to get it to us.

“So given that we do nearly 60 percent of the nation’s wool, you would have thought that having us as part of the program would have been a good thing to do,” he said.

“There have been no eSpecis passed to us, from either of those organisations,” he said.

“You can collect it, but what are you doing with it?”

AWEX chief executive officer Mark Grave expected to release an eSpeci to the trade next month. AWEX wanted to release the eSpeci before it started its eBale project trial in Western Australia, mostly likely just after Easter.

AWEX’s eSpeci will be part of an updated web-based speci called WoolClip, which as an mobile app will be able to work online and off-line, and scan bale identification.

“WoolClip will be the front-facing brand of the whole thing and how it is communicated will be called BaleTrail, so you will be able to transmit or send (data) to a broker or warehouse, and you will also be able to, in this part of the project track it from farm to warehouse, or warehouse to farm.”

Mr Grave said the eSpecis all had to be “of a similar language” otherwise brokers and others won’t be able to download and use the information.

“At the end of the day it has got to be about how we can improve communication and efficiency in the industry — that’s what it is about.

“That’s where we are at in trying to do that, we’ve been working in this space for a long time and we want to make sure that it happens.”

Mr Grave said it was important that each of the eSpeci were able to relate to the systems used by brokers.

“Yes, there is certainly some co-ordination required and I’m sure each provider will be doing their homework on that, but I can only speak for ourselves.”

He said AWI is trialling and eSpeci tool, the first release of the WoolQ functionality, in a number of shearing sheds around the country with positive results.

WoolQ aims to be the focal point of the Australian wool industry by delivering information, data, selling choices and trading opportunities to wool growers, their agents and other industry professionals in a single on-line venue, Mr McCullough said. The building of the WoolQ platform is well under way and various parts of its functionality will be periodically delivered to wool growers over the next 12 months, he said.

Mr McCullough urged wool growers to establish a profile on WoolQ at www.woolq.com to be notified when it is available, receive updates and be offered an opportunity to test features ahead of full public release.

Mr McCullough said the WoolQ eSpeci is an alternative to the current paper speci and will enable growers and their classers to accurately and efficiently capture in-shed data at the time of shearing.

He said capturing this data electronically will reduce errors, enable easier sharing of documentation and a richer collection of information from multiple contributors. Complete eSpecis can be uploaded and sent electronically to brokers and easily shared with any other key contacts, Mr McCullough said.

“This electronic record of data will be stored in your own secure dashboard on WoolQ and will enable rich and easy analysis of your clip specs, comparisons with prior year(s) and much more.”

WoolQ’s Will Wilson said the details for the WoolQ eSpeci launch are being finalised.