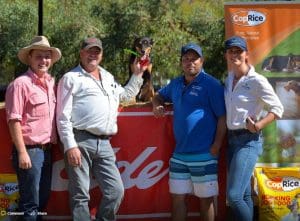 COOTAMUNDRA stockman Shane Maurer is on a good run with his Kelpies — claiming his first national yard dog title last year and at the weekend setting a new auction record of $14,000.

Charlie’s $14,000 price tags exceeded the previous Australian record of $12,000 paid for Kelpies at the Casterton Working Dog Auction in Victoria in 2012 and 2017, and at the National Working Stock Dog Futurity and Sale at Murrurundi in New South Wales last year.

Mr Evans also bought the top-priced dog at the 2017 Jerilderie auction and said he could earn the value of his record-priced dog in one day on goats, allowing him to pay more than other stockman for a good dog. He catches between 5000-10,000 goats annually and last year grossed about $700,000 from goat sales.

“The money is still there with the goats.”

Mr Evans said he had bought three dogs from Shane Maurer and his dogs were “up there with Ricky Jones’ dogs for strength”, which was needed for goat mustering.

Mr Maurer said Charlie was a very capable all-round sheep dog; good in the paddock and the yard, and able to work dry cattle. The dog had also had some trial success and competed at novice level.

“He’s as good in the yard as he is in the paddock.”

Charlie was bred by Graham Cooper of Stockinbingal, NSW, by Coogee Trooper out of Coopendale Loo. He bought the dog as a 4-5 month-old pup for less than $1000.

Mr Maurer said he wasn’t surprised that good dogs were making $10,000-plus, with the good, sheep, goat, cattle and wool prices, and landowners requiring fewer staff to handle more stock on properties.

Mr Doolan attributed the strong working dog prices to the strength of livestock and wool prices, the reputation of the auction to attract good dogs and the sale’s interface with AuctionsPlus for the first time.