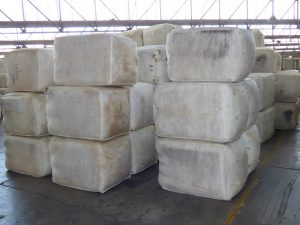 WOOL prices fell at Australian auctions this week, with finer Merino and crossbred clips the most-affected.

However, despite the AWEX Eastern Market Indicator falling 14 cents to 1669c/kg, the benchmark is 306 cents, or 22.5 percent, higher than at the corresponding sale last year.

AWEX senior market analyst Lionel Plunkett said the size of the offering allowed buyers to be more selective in their purchases.

“The market opened solidly, wools sold at levels at or above those achieved at the previous sale. However, as the sale progressed, prices began to slowly but noticeably deteriorate.

“In recent weeks, as the market rose, the finer microns enjoyed the largest increases in price. The finer microns again experienced the biggest market movements,” he said.

“This week; however, it was price corrections — the finer the micron, the greater the reduction in price.

The oddment market defied the other sectors and managed to maintain its upward trend. Most types and descriptions recorded price rises of 10 to 20 cents for the week, the finer wools enjoying the greatest increases. A large offering of lambs was irregular but generally 15 to 30 cents dearer.