A two-week ‘bull run’ in the Australian wool market has provided a good opportunity for woolgrowers to forward sell at least part of their clip, according to Australian Wool Network risk manager Brent Squires. 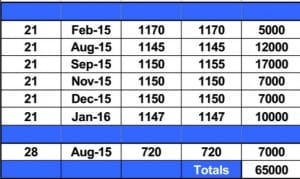 Mr Squires said though it was too early to tell how far into 2016 the current levels would be sustained, crossbred wool price levels were now at historical highs and medium Merinos have pushed back to their 80 percentile levels.

He advised growers to “go with the known things, we just don’t know what is around that next corner, what’s waiting for us”. 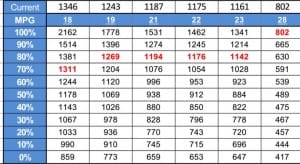 10 year percentiles. Click on table to view in larger format.

“Merino cardings are also getting their share of the action, pushing to 891c/kg which is a record level.

“After two weeks of a bull run the wool market has gained from 60 to 90c/kg clean for wools in the 17 to 23 micron range, even crossbreds have managed to push higher again, with 30 microns pushing nearly 60c/kg clean in only two weeks,” Mr Squires said.

Mr Squires said there was a lot of activity on the Riemann forward offer board last week, with most of the dealing done around the 1150 c/kg level for 21 microns, even out as far as January 16, 2016.

“It will take another week like last week to more this forward level much higher.

“History has shown us that these rallies are normally short and sharp, so get those GTC (Good Till Cancelled) orders in while the going is good or you will miss the boat.”

Mr Squires last week advised AWN clients if they had wool on hand, they should get it into the physical market as soon as possible.

“If your wool is still on the sheep’s back then you can forward sell it while the going is good and not have to worry if the market will still be at these better levels by time you get your clip to market.”

He said looking at the Australian wool market historically, if growers could get somewhere around 1150-1160c/kg clean as a forward price, six months out from shearing, removing “all the unknowns” and in the 75-50pc percentile band, “that’s good money”.

“It is certainly not the best, but it is far from the worst.”

“And you just don’t know what could be happening come the time that you are looking to sell your wool on the market.”

Grower interest in forward marketing of wool had increased recently, with little interest in selling Merino wool forward, before the latest rises in the physical market, he said.

“It has been flat, it’s been dead flat, for at least six months.

“The tide has turned a little bit, we’ve seen some definite (physical market) activity,” he said.

“People have been caught a bit short on some orders, currency has helped make things a bit more affordable and stocks are pretty low overseas – all those things have combined to push the market up to where it is now.”