AUSTRALIAN Wool Innovation has declared it has not misled a Senate Estimates committee despite several discrepancies around its evidence to a hearing in Canberra this week.

At a Senate Estimates hearing on Tuesday, AWI chief executive officer Stuart McCullough told the committee “it sounds right” that AWI, after seeking legal counsel, wrote to potential board aspirant and Australian Wool Growers Association director Chick Olsson, confirming he would not be able to collect signatures for a 2019 election nomination form with multiple candidates.

When asked by the committee chair Senator Susan McDonald if he would table that legal advice, Mr McCullough said “sure”.

However, the senators were not told that AWI company secretary Jim Story in 2019 had also advised Mr Olsson, via text, that AWI’s legal advice permitted the wool grower to have several candidates named on a nomination signature form. Neither Mr Story nor AWI chair Colette Garnsey attended the 23 March Senate Estimates hearing.

“Chick, I am writing to advise that our legal advice is that it is permissible albeit unusual for you to have several candidates named on the nomination form.

However, on August 20, 2019, Mr Story then texted Mr Olsson again, confirming that he could not collect signatures for multiple candidates on one nomination form.

“Correct. No multiple candidates on one nomination form as we discussed. Jim.”

Senator Sterle told Sheep Central he would be forwarding any information he received about Mr Story’s texts to the RRAT committee secretariat to be distributed to the other senators.

“Because if that is the case, and I have no cause to doubt Mr Olsson, the Senate has been possibly misled.

“It’s all assumption at this stage,” Senator Sterle said.

The senator told Sheep Central yesterday he would be investigating if there were two sets of legal advice to AWI on the issue: one from Jim Story giving Mr Olsson approval to collect signatures for several candidates on the same nomination form, and further advice, according to Mr McCullough, disallowing this.

Senator Sterle said he would seeking the legal advice that Mr Story referred to in his text to Mr Olsson.

“If Mr Olsson has that proof, well AWI have got some backtracking to do very quickly, haven’t they?”

He said AWI might have to “correct the record, because it is an offence to mislead a Senate Committee.”

Mr Olsson has told Sheep Central that the multiple candidate nomination forms were used in 2007 for a Roger Fletcher-Olsson ticket, and in 2008, for the collection of signatures for Laurence Modiano, on a ticket that also included Meredith Sheil, George Falkiner and David Webster. Mr Story was not the AWI company secretary at that time.

On Tuesday, Mr McCullough appeared to agree with Mr Sterle’s assertions that “you (AWI) don’t run tickets” and have “never run tickets” of multiple candidates in the nomination process.

Mr McCullough told the hearing that Mr Olsson’s claims that at least two joint tickets of multiple nominees were allowed in previous AWI elections was “not correct”:

“As I understand, that is not correct, it makes no good sense that you can just go and get 100 signatures and put as many names of candidates on those 100 signatures, and potentially get all those nominations up with just 100.

“Every person who wishes to nominate for the board of AWI must go out and get 100 signatures of their own,” Mr McCullough said.

“What he wanted to do is put up 100 signatures, just 100, and put three nomination candidates on the top.”

This has been disputed by Mr Olsson, who said shareholders were asked to sign nomination forms that already listed the three candidate’s names: his, Professor Peter Windsor and Dr Dominique Van Der Saag.

Mr McCullough’s statement that “every person” nominating for the board must get 100 signatures is also not correct. It has not been the case for incumbent re-standing directors and this year a fast-track process for candidates approved by the AWI board nomination committee will operate. These nominees endorsed for their skills will not be required to collect 100 shareholder signatures to be on the ballot.

Eight-year chair term clauses not in board charter 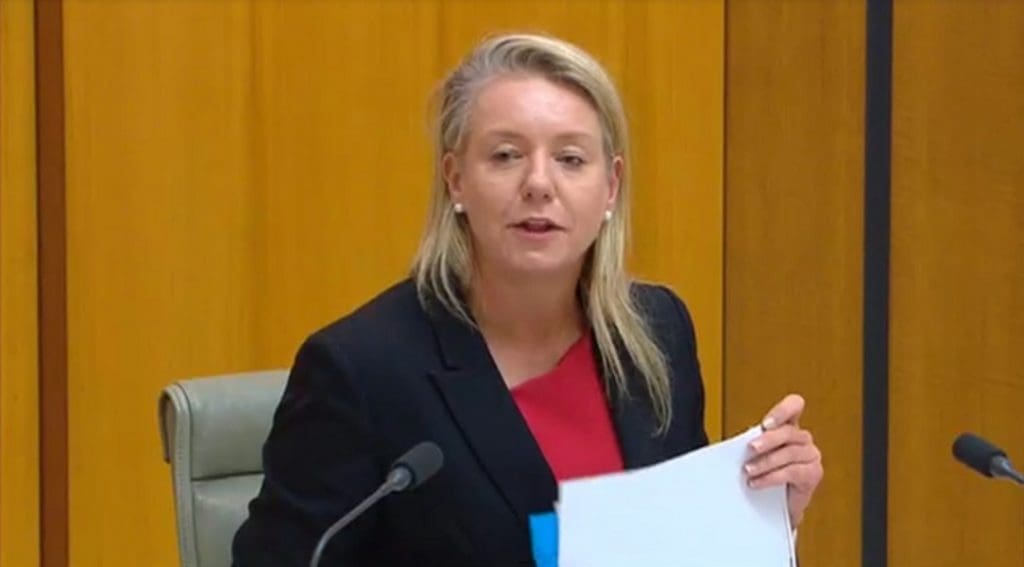 Mr McCullough also told the RRAT committee senators that a clause outlining an eight-year limit for its chair role was in its board charter.

He told Senator McKenzie Estimates resolved early in 2020 that it would put a limit on the tenure of the company chair of eight years.

“Now we could adjust that in the charter…. yes we have,” he told Senator McKenzie.

Ms McKenzie then asked Mr McCullough if she went to the board charter now (Tuesday), would it have the chair term changes.

“Yeah, it should have,” Mr McCullough said, adding he would check if the charter in fact contained the clauses.

“And if it was removed please let me know how, when and why,” Senator McKenzie said.

“It would not have been removed, it would have just been a function of not getting to update that on the website or something, but we’ll check that.”

However, Sheep Central learned and has confirmed that on Tuesday and as late as 1.30pm today the relevant clauses were not in AWI’s current board charter version on its website.

Sheep Central was told and has confirmed that the relevant eight-year chair term clauses were in the previous board charter policy reviewed on July 16, 2020, but were not in the current October 2020 version, as claimed by Mr McCullough.

The clauses in the July board charter version read:

5.1.4 The maximum term of a Chairperson will be for 8 years or the next Annual General Meeting after the period of 8 years, whichever is the later.

5.1.5 The Chairperson must retire from the Board at the same time as their term as Chair concludes. There will be a minimum roll off period of two years before a retiring Chairperson may stand for re-election as a director.

Additionally, AWI, in an answer to an October question on notice also advised the RRAT committee in December last year that changes regarding chairman tenure were implemented in July 2020 to the board charter. When asked by Senator Sterle how many of the 82 recommendations in the EY Review of Performance of AWI had been implemented Mr McCullough said “80”. He said the two outstanding recommendations related to improving company culture, which was “closed but was not viewed as completed.”

The second outstanding recommendation concerned a director tenure limit of 10 years, that would be resolved in a motion before shareholders at the 2021 annual general meeting and recommended for approval by the board. Mr McCullough said approval was not a fait d’accompli and would require 75 percent voter agreement.

“I can’t think of any precedence in the past where a board recommended constitutional change wasn’t agreed to by the shareholders, so we expect that to go through.”

Mr McCullough told Senator Sterle that AWI’s failure to implement the two recommendations did not constitute a breach of its statutory funding agreement with the Commonwealth.

However, WoolProducers Australia chief executive officer Jo Hall said recommendation 1.14.7 from the review had also not been implemented.

“As the Department of Agriculture, Water and the Environment, in collaboration with AWI are the arbiters of what recommendations are completed or not, WoolProducers has had no say in what is deemed finalised.

“However, we have been pointing out to both the minister and the department since before the original completion date of October 2018 that recommendation 1.14.7 needed to be actioned  in line with the intent of the original recommendation,” she said.

“The fact that this wasn’t done has potentially had a bearing on how all other subsequent recommendations were, or in many cases, were not implemented in line with the original intent of the EY Review.

“If a governance forum comprising of industry, DAWE and AWI had been convened to monitor the implementation of recommendations in line with recommendation 1.14.7, I’d suggest that there would have been more tangible outcomes from this review and that the wool industry could have been spared two and a half years of arguments and missed opportunities.”

Senator Sterle said AWI would have a chance to correct the record on the number of EY Review recommendations that have been implemented.

“All information that comes to me, I will challenge them on.”

AWI has not misled the RRAT committee – AWI

Sheep Central’s questions, directed to Mr McCullough, about the AWI CEO’s Senate Estimates evidence were instead answered today by an unidentified AWI spokesman.

The spokesman said the board chair tenure changes were “announced publicly and will be followed through.”

“The latest version of the board charter will be uploaded to the website next week.”

“In regard to this issue, the company feels it has been thoroughly briefed,” he said.

“The company has a full record of correspondence in regard to the matter.”

The spokesman said Mr Story made the decision to disallow Mr Olsson’s multiple candidate nomination form proposal, in his capacity as company secretary.

“That decision was based on legal advice and in consultation with Link Market Services.”

The AWI spokesman said the EY Review’s recommendation 1.14.7 has been implemented.

“It has been implemented and AWI works with the Federal Government’s Department of Agriculture, Water and Environment in regard to monitoring the implementation of the ROP.”

When asked if discrepancies in AWI evidence on recent board charter changes, EY Review recommendations and the non-disclosure of the legal advice provided to Mr Story during the 2019 election, together constituted the misleading of the Senate committee, the AWI spokesman said:

“That is an incorrect conclusion.”