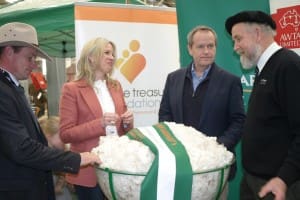 VALUE-ADDING of wool in Australia was on the table when Oppositon leader Bill Shorten and family visited the Australian Sheep and Wool Show at Bendigo on Saturday.

After being told about the lack of early stage wool processing in Australia, Mr Shorten suggested that surely there was a chance for advanced manufacturing of wool in the country.

“I think with wool the obvious proposition here is when can we value add industry here, rather than simply exporting it all and then buying it back at multiple value.

Mr Shorten said the argument around manufacturing once was that it was a race to the lowest wage economies.

“Now with machinery, automation and technology I think there is a chance to have advanced manufacturing back in this country.

“Like any of our big commodity exports surely there is value we can add here,” he said.

Mr Shorten said there was a lot of good news out in agricultural Australia.

“That doesn’t mean there is not problems and challenges but it is great to see a lot of young students here, teenagers, getting a taste of hat life on the land might be like and seeing possibilities.”

Mr Shorten said his message for rural Australia was that: “Labor doesn’t take you granted – we want to be competitive in our policies to you.

“We recognise that Australia is more than the three big capital cities on the east coast committed to giving country kids the opportunity to go to TAFE and to uni,” he said.

“We’re very committed to stimulating industry outside of the cities.”

“That’s the impression I get, positive stories and we need to see how we value add here.”

Mr Shorten was invited to the show after mentioning he would like to come to the show. His wife’s family was from the land and in his time with the Australian Workers Union he had visited a lot of rural Australia.

“For once I had the lucky fortune to combine work and pack my family up for the day and come up and have a look.”

“So much of it went offshore, we need to bring the technology in here.”

She was enjoying introducing her son Rupert to the industry her family was involved in and she was impressed by the involvement of school students in the show. Ms Bryce’s grandparents were involved in the wool industry in western Queensland.

“I worry about regional rural and country kids, and the big divide between the bush and even, big regional towns and cities,” she said.

“I think culturally we really need to get the city kids to understand their clothes and their food.”

The Shortens presented sashes to some sheep champions and also watched the shearing events while at the show.