AUSTRALIA’S top machine shearers have reclaimed the trans-Tasman crown with a convincing win at the 2022 Australian Shearing and Wool Handling Championships in Bendigo last night.

But the New Zealand blade shearers – Tony Dobbs and Allan Oldfield – maintained the country’s unbeaten record in trans-Tasman tests in their specialty.

The Australian machine-shearing team was led by a supremely fast and clean Daniel McIntyre from New South Wales and supported by South Australian Nathan Meaney, and Sam Mackrill from Rochester, in his first test for Australia.

Up against New Zealand’s Nathan Stratford, Stacey Te Huia and Leon Samuels, the Australian shearers finished with 231.93 penalty points, well ahead of the New Zealanders on 298.20 points. NSW shearer Daniel McIntyre leading the way to victory in the trans-Tasman test.

McIntyre was first around his six Merino sheep and six crossbred lambs in 17 minutes 20 seconds and scored the least board points of all six competitors, but was backed up by Meaney and Mackrill who scored lower on board points than the Kiwis and were the best performers on outside penalties. Overall the Australians all individually scored lower board and outside penalties than the New Zealanders, but the speed of Samuels and Te Huia and on the day in finishing second and third minimized the points damage.

Although the shearers collectively picked the sheep to be shorn before taking the stand, all shearers had difficulty with the added condition in the fleeces, breaks in the wool and grass seeds, compounded by recent wet weather.

However, although the New Zealanders predictably gained some ground in the crossbred lambs, they were hit hardest by the sheep, with Nathan Stratford’s skill and experience showing as he dug deep pen through a tough pen that led to him finishing more than two-and-half minutes after new trans-Tasman competitor Sam Mackrill.

The Bendigo event was New Zealand’s first trans-Tasman machine shearing and wool handling tests since it won both at the Golden Shears in Masterton in 2020. Australia also won the last machine-shearing test in Dubbo in 2019.

Australia has now won 37 of the 67 trans-Tasman machine-shearing tests since the annual home-and-away matches started in 1974, continuing its domination of the events. New Zealand last won in Australia at Hay, NSW, 12 years ago. 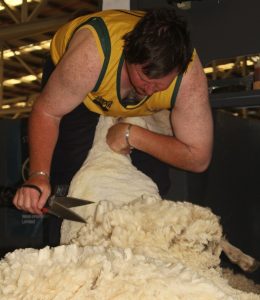 In the blade shearing test, the Australians John Dalla from South Australia and Ken French from Victoria, got within four penalty points of beating New Zealand’s Oldfield and Dobbs, believed to be one of the closest contests in the history of the event. 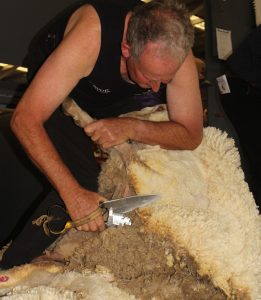 Allan Oldfield was first home, finishing his three sheep in 12 minutes and 42 seconds, followed by South Australian blade shearer John Dalla, who gave the best performance of clean blade shearing in the event, scoring the least board, outside and time penalty points of all competitors.

But it was the combined performance of the New Zealanders that won them the test, with final penalty scores New Zealand 154.53 points to Australia’s 158.32 points.

The championships continue today with the wool handling trans-Tasman test, and the open and  Bendigo shearing and wool handling finals.