AUSTRALIA’S lamb production forecasts for the next two years have been revised upward due to higher breeding ewe numbers and autumn trade lamb prices could improve with fewer lambs on farms.

Ewes on hand revised up by 1 million

The survey showed that the total number of breeding ewes had increased 3pc on this time last year to 42 million head – leading to an upward revision in slaughter, production and exports for 2016 and 2017. This meant about one million ewes would produce an extra 850,000 lambs this year. Lamb production is forecast to reach a new high of 515,000 tonnes by 2018.

“There has been a fast start to the year, with lamb slaughter revised 3pc higher from December’s forecast to 22 million head, but still 3pc below the 2015 record,” Mr Thomas said.

In terms of production, national lamb carcase weights have held up surprisingly well, despite the hot and dry conditions endured by many producers over the summer months, he said.

However, this is expected to be challenged over the coming winter months, especially if there is no respite in the key lamb producing regions.

Australian lamb exports are forecast to remain on par with the previous two years at 235,000 tonnes shipped weight, before gradually growing in line with production to 280,000 tonnes – 60pc of lamb meat production — by 2020.

MLA said across the markets, lamb sales to the US in the lead up to Easter were buoyant, but it is unclear how demand will hold up through spring into early summer. While lamb shipments to China have been slightly ahead of year-ago levels, mutton has lagged as a result of the high stocks in the market.

Mr Thomas said in terms of trade lamb prices there may be some upward potential during the autumn months, with export values sitting an average of $1.75 above the national trade lamb indicator. 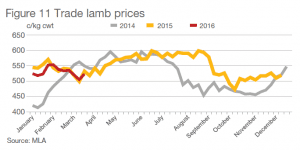 Historically there has been a strong relationship (83pc correlation) between the average export unit value and the national trade lamb indicator. The difference between the two usually ranges from $1 to $2/kg, with the wider gap (nearer $2/kg) often the result of low lamb prices, while a closer gap (nearer $1/kg) is when lamb prices are strong. The most recent data from the ABS suggested that the difference was $1.75/kg in January, implying there may be some upward potential in lamb prices during the autumn months.

“There are also signs of easing competitive pressure from New Zealand production as the season progresses,” he said. 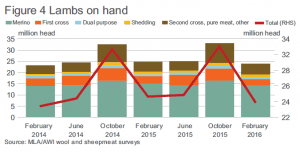 However, Mr Thomas said this seasonal rise will be tested by the Australian dollar, which has been trending dearer over the past few months. An Australian dollar on or above 75 US cents instead of below 70 US cents will take some shine off export prices.

“Additionally, if continuing hot and dry conditions persist, prices will be tested.”

The total number of lambs on hand declined 4pc year-on-year to 23.9 million head, attributed to a 7pc decrease in Merino lambs to 14 million, a 10pc fall in first cross lambs to 3 million and a 3pc decline in shedding lambs to 0.2 million. The number of pure meat, second cross and composite lambs fell 10pc to 4.8 million and dual-purpose lambs dropped 12pc to 914,283.