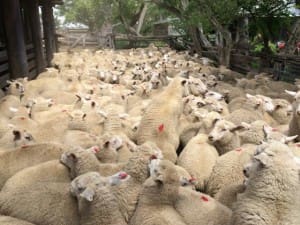 Processor demand for lambs remained strong early this week, with over the hook rates holding firm or increasing despite fluctuations in saleyards over the past week.

Prices over the next few months are set to be affected by the uncertain turn-off of lotfed and restocked shorn lambs, processors’ contracted supplies, weather conditions and forward contracting by exporters.

After the first day’s sales after the long weekend, MLA’s National Livestock Reporting Service quoted a fall in the Eastern States Daily Indicators for restocking (546c/kg cwt, down 4 cents) and light lambs (532c/kg, down 2 cents). But the main processing categories lifted, with the trade ESDI up three cents to 545c/kg cwt and heavy lamb indice up one cent to 553c/kg cwt. The national trade (547c/kg, up 4 cents) and heavy (557c/kg, up 2 cents) indices were also firmer.

The NLRS quoted the ES and national mutton indicators at 348c/kg cwt, a lift of four cents.

Will lamb prices be softer in February-March or lift further?

He said there was limited competition for heavy lambs, with only three major exporters.

“And they’ve got enough supplies around them to keep the price at a reasonable level.”

“The trade weight lambs are scarce, so they are making a premium over the heavy lambs.”

There is export demand for light off-bred and Merino lambs, and demand from restockers for better bred store lambs is still insatiable, he said.

“Anything that is well-bred and with short skins – the graziers are buying them all.

“There are a lot of lambs still in the system, so I don’t think we will see the job firm,” he said.

“If anything I would say we could see February-March be a fraction softer.”

Mr Nicholson said he was not sure if the market could soak up a lot of heavy lambs returning from feedlots or pasture-finishing. The market might not reach $200 for heavy lambs until the winter.

“When everyone’s got lambs you are not going to see that sort of money.

“The $190 (estimated 32kg cwt) for lambs at Ballarat yesterday were for elephants, so per kilogram carcase weight they are cheap.”

Mr Nicholson said the heavy lambs coming in were yielding well and the trade lambs “not so much, because the feed is just there”.

“A hot fortnight and you might see a bit of scurry.”

Mr White said exporters generally have lamb contracts up to January, but some are now starting to buy in saleyards.

“Come February, I don’t think they have got a lot of lambs contracted.

“I haven’t heard of any contracts for February, but there may be.”

Mr White said at least half the current Ballarat yardings this year have been light and store lambs.

“There will be no more better quality or heavier lambs coming on the market – it (quality supply) has peaked.

“If Bendigo dropped $10 Monday, we would yard nothing, because we’ve got plenty of fed – we are not going to give them away.”

Mr White said lambs at Forbes and Wagga have sold for up to $198, showing exporters still wanted heavy lambs.

The NLRS said NSW’s over-the-hook lamb rates lifted slightly across all categories this week, with trade rates reaching a top of 560c/kg cwt. Mutton rates were dearer overall, with medium weight carcases up an average of 6c/kg cwt.

The NLRS said Victoria’s over-the-hook lamb rates remained unchanged week-on-week, with the majority of contributors reporting the market has remained steady. Mutton rates were slightly lower across all categories.

The NLRS quoted WA’s OTH lamb and mutton rates as unchanged this week, apart from a drop in trade lamb prices.

The NLRS said lamb quality was similar to the previous sale, with good numbers of well-finished lambs on offer. Heavy and extra heavy lambs made up most of the yarding. The usual buyers competed in a cheaper market.

The NLRS said lamb quality was good. The usual buyers operated in a dearer market with most lambs selling to a dearer trend, especially the better-finished trade and heavy lambs, which were generally $2-$8 up on last week. Fewer young lambs with longer skins are being offered, with the better heavier weights selling from $130-$154. Heavy and extra heavy shorn lambs were well-represented and sold to a market top of $190.

Restockers paid mostly from $84-$120 for lambs and to $130 for young first cross ewes, with most restocking lambs selling to a dearer trend.

The sheep offering included good runs of Merino and crossbred sheep with many Merino sheep in near-full wool. Most sheep sold to a dearer trend, with light and trade sheep up $5 in places. Restockers were active on some sheep and paid from $70-$131 for crossbred ewes and to $114 for Merino wethers.

The NLRS said the generally good quality yarding of crossbred and merino lambs sold to easing demand from the usual trade and processor buyers. The best quality trade lambs proved to be the exceptions of the sale and sold up to the values of last week. Restockers and feeders were cautiously active on suitable light weight lambs.

The mixed sheep yarding sold to easing competition from the usual trade and processor buyers. Restockers didn’t provide any input.

The MLRS said the usual trade and processor buyers were present, along with a small restocker presence, with lamb prices generally improving.

The NLRS said light Merino lambs were in strong supply but there were limited supplies of wethers. Quality was fair with some good prime lambs and reasonable numbers of well-conditioned ewes.

All buyers were active and live export buyers were keen on store wether lamb and wether drafts. Prices were higher for most categories, with prime lambs mostly up $4-$6 and ewes also up $5. Wethers lifted by close to $10 to live export for the few suitable pens.

Wether prices were driven by live export orders with most suitable drafts making $66-$100. Feeders and restockers paid $4 more for lighter and store drafts with sales from $45-$90 for most. Rams also attracted stronger competition, with lamb sales from $70-$95. Young drafts to export and feeders made $40-$74, while old rams sold from $10-$40.