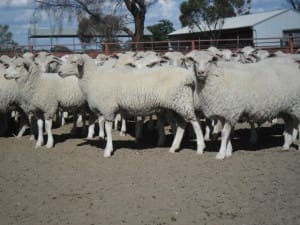 The National Livestock Reporting Service’s indicator result for the week highlight the continued strong demand for restocker lambs from traders and for heavy lambs among processors.

On the completion of Friday’s saleyard sales, the NLRS Eastern States Daily Indicator (ESDI) for restocker lambs had lifted two cents to 573c/kg cwt, capping off a huge 28-cent rise for the week. The Merino lamb ESDI rose three cents to 527c/kg, up 15 cents for the week, and light lambs lifted one cent to 557c/kg, representing a weekly gain of 10 cents.

The ESDI for trade lambs was firm on 570c/kg, yet 14 cents for the week, and heavy lambs were down one cent to 588c/kg, still closing with a 19-cent weekly gain.

The national lamb indicator for trade lambs was down two cents to 571c/kg and the heavy lamb indice was down one cent to 589c/kg. Mutton ESDI and national indicators were firm on 364c/kg, a weekly rise of six cents for the eastern states’ markets.

The NLRS said quality was very good, particularly for the heavy grades. Mainly heavy weights were penned, with a reduced number of trade lambs. Store lamb supply increased, with some large lines yarded. All the buyers operated and competition was a little weaker, resulting in a cheaper market.

The NLRS said lamb quality was similar to the previous sale, with a good number of well-finished lambs along with the plainer types. Heavy and extra heavy weight lambs made up most of the yarding. The usual buyers competed in a firm to dearer market.

The NLRS said the selection of heavy lambs improved on recent weeks and this was reflected in bidding support from processors. The market displayed a dearer trend, with the best price increases recorded for well-bred and finished lambs with weight.

The market reached a top of $198 for a feature line of extra heavy crossbred lambs estimated to weight about 33kg cwt, with an $8 skin. A second line from the same property made $187.50. However, few lines displayed such quality and size and prices over $160 were limited. The bulk of the yarding comprised lighter lambs that weighed less than 21kg cwt. Most of these lambs from $80-$120, with local restockers paying to $110 for some good frame crossbred store lambs.

Bidding for most of the heavy trade and export lambs ranged from $130-$155, or around 550c/kg-585c/kg cwt, depending on quality and skin values. Competition for the top pens of extra heavy lambs was solid from $165-$198.

The sheep yarding comprised a mix of weights and grades. Some extra heavy crossbred ewes sold from $110-$131, while a line of long wool Merino wethers made from $106-$122. Of the heavy slaughter sheep most sales ranged from $60-$90.