AUSTRALIAN wool growers who successfully ceased mulesing have been recruited by major animal welfare groups in the battle to ban the practice on the nation’s sheep properties.

A new report — ‘Towards a Non-Mulesed Future’ – with data from 97 growers, has found that most (77.5 percent) transitioned to plain-bodied Merinos within five years and 42.7pc within two years.

Most growers surveyed for the report said moving to plain-bodied Merinos is not costly, increased lamb production, lowered body strike, and generated wool price premiums and a higher return on investment.

The report by Brisbane consultancy BG Economics and funded by Humane Society International and FOUR PAWS seems to contrast with Australian Wool Innovation-funded research that found it might take 11 to 20 years to reduce the incidence of flystrike in flocks to less than one strike per 100 ewes per year.

Humane Society International and FOUR PAWS believe that the viability of the genetic solution to mulesing is now clear and there’s never been a better time for industry to switch gears and create a roadmap to end mulesing.

“These growers are now well-positioned to meet the market in the years to come as more retailers make the decision to only stock products which use non-mulesed wool.”

Dr Thornton said future studies focused solely on analysing the financial benefits and costs to wool growers of plain-bodied selective breeding, the transitioning process and the science of plain-bodied genetic breeding, would be invaluable to provide deeper analyses, given the increasing worldwide demand for wool from non-mulesed Australian Merino sheep.

Dr Thornton said BG Economics independent survey of 97 wool growers and seven case studies provided a ‘big picture’ understanding of why and how growers made the transition.

The survey of 97 Australian wool growers in different states, climate zones and rainfall areas, found that:

FOUR PAWS Australia head of programs Jessica Medcalf said that while for decades there has been concern around the costs of transitioning away from mulesing, and the extensive amount of time it would take, it’s now time to lay these to rest.

“Times have changed and producers across the country are finding it possible, and financially profitable, to end their reliance on mulesing,” she said.

“Lambs suffer fear and stress, as well as acute pain for up to three days after being mulesed, while their wounds take weeks to heal.

“Furthermore, mulesing does not provide sheep with whole body protection from flystrike,” she said.

“It’s no wonder that collectively, hundreds of thousands of people globally have voiced their concern about mulesing, a concern which is only going to grow as people are increasingly interested in animal protection, and ethical fashion.

Report commissioned due to lack of industry research

HSI and FOUR PAWS said they commissioned the report in the absence of industry undertaking research into the viability of a genetic solution. It’s development was supported by a pilot group of wool producers keen to see change to protect the industry’s reputation and concerns around market access, as well as for the sake of animal welfare, the group said.

“By incorporating good genetics all of the wool growers surveyed have shown it is possible to end both flystrike and mulesing.

“It is taking time to dispel the belief that genetic traits such as low wrinkle equals low profits, however the evidence in this report makes it clear that this is certainly not the case,” she said.

“This report shows producers can move with the times and solve an animal welfare problem without compromising profitability,” she said.

“As a first step, we encourage industry leaders to acknowledge that the genetic solution is the best way to manage flystrike sustainably, alongside adequate animal husbandry practices.”

The producers surveyed gave a number of key recommendations for making a successful transition, including:

Four main points emerged from the data about how the seven wool growers successfully transitioned away from wrinkly type Merinos to plain-bodied types. 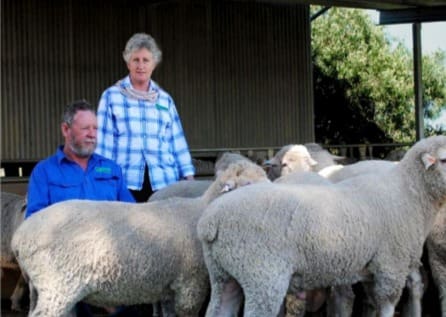 Queensland Merino breeders Mark and Vicki Murphy – “If the industry doesn’t get its mind around what is required it will disappear.”

Central western NSW grower Chad Taylor said mulesing is no longer accepted by many of the retail brands that sell woollen products
and growers must evolve to accommodate this change in sentiment if they are to remain in business.

“Many still think we can tell our consumer what we are going to sell them, that they have to buy it, when of course they don’t,” he said.

South-eastern South Australian grower Chris Atkinson said each year people all over the world are saying more and more that they want wool from non-
mulesed sheep.

“To get ahead of the ball and have a product that will be in high demand in 5 or 10 years’ time start your breeding program now and don’t get left behind,” he said.

“Having family in the buying side of the wool industry the most alarming comment is that companies are already making the investment to other wool
producing nations including Africa, Argentina, Russia and China in order to fill the NM gap and demand from consumers,” he said.

South-west Victorian ultrafine Merino wool producer David Rowbottom said he believed growers must be seen to do the right thing in the consumer’s eyes and mulesing must stop if we are to have a future and selective breeding is the best alternative in the long run.

“Improved wool quality to produce softer, more desirable product along with acceptable animal welfare practices is the only way forward.”

Wool grower and author of ‘Breaking the Sheep’s Back’ Charles Massey welcomed the report.

“This clearly confirms, first, that wool growers responding to customer demand for better animal welfare by eliminating mulesing find it profitable to do so; that transitioning to plain-bodied Merinos that don’t need mulesing is achievable within five years; and moreover, that this transition is not costly, that it leads to increased lamb-growth and weaning percentages, and delivers wool price premiums whilst being integral to their increased profitability.”

Click here to read the report – Towards a Non-Mulesed Future.