Sheep being moved through the Jordan slaughterhouse. Image – Animals Australia.

AUSTRALIAN sheep have been withdrawn from a Jordanian slaughter facility after non-compliant handling was reported to exporter Livestock Shipping Services during the Eid festival by animal rights body Animals Australia.

The animal rights group has also filed a formal complaint under Australia’s Exporter Supply Chain Assurance System, supplying footage of dying Australian sheep being tossed onto a bloody slaughter floor after having their throats cut.

The Department of Agriculture, Water and the Environment (DAWE) said on the 28 July a third party, now identified as Animals Australia, reported non-compliant handling and slaughter at the facility, which had been approved under ESCAS.

In a statement issued by the Australian Livestock Exporters Council on behalf of Livestock Shipping Services, the exporter confirmed that the non-compliance occurred on the 20th July 2021. The LSS statement said the facility has “previously never had a non-compliance.”

The company said once it was advised of the non-compliance, it immediately suspended all slaughter and sales at the facility and started an extensive investigation. LSS is currently working with local authorities to remove all the remaining sheep from the facility and relocate them to an approved feedlot. Loading of the sheep will be overseen by its Jordan supply chain manager to ensure animal handling and transport meets ESCAS requirements.

“A rigorous training program will be implemented into that facility before sheep will return to ensure that it is of the standard that is required of the facilities LSS supplies to.

“We believe that we have significantly improved welfare outcomes for both Australian and local livestock with our presence and support in this market, and this non-compliance further highlights the ongoing importance of Australian involvement in the market to uphold ESCAS and animal welfare standards,” the manager said.

“LSS is committed to ESCAS compliance and has invested significantly in all markets it exports to and will continue to do so.

“By investing in people and training this not only improves animal welfare outcomes for Australian livestock but also livestock imported from other countries and local livestock,” the manager said.

“We know there is always more to be done and we will continue to invest in our supply chains.”

LSS livestock manager Harold Sealy said the company was continuing its investigation and would not make any further comment.

The company statement said it was committed to understanding why the facility operated this way and rectifying the issues.

“We are committed to working with DAWE and providing all information from our investigation into this unacceptable conduct,” the company said.

A sheep lying on the floor of the Jordan slaughterhouse. Image – Animals Australia. 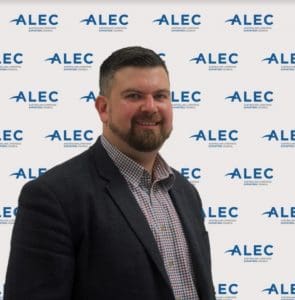 Australian Livestock Exporters Council chief executive officer Mark Harvey-Sutton said the incident did not indicate intrinsic issues with the LSS supply chain nor reflect on ESCAS. He confirmed the non-compliance related to the mishandling of sheep during the slaughter process.

“Basically the animals were slaughtered and there was no confirmation of death – things that they need to go through to strictly adhere to the ESCAS process weren’t done,” he said.

“These are isolated incidents that need to be judged on their own merits, and that’s what is happening here.

“LSS is working with DAWE on the next steps and there is an investigation underway,” Mr Harvey-Sutton said.

“It’s obviously disappointing that it happened and LSS if anything, is the most disappointed.”

Mr Harvey-Sutton said the incident also showed that there are remedies and processes in place when such incidents occur.

He confirmed that Animals Australia notified DAWE of the non-compliant handling of sheep at the facility. DAWE then advised LSS.

“There is no doubt that Animals Australia are active and looking for incidents like this.

“But all exporters, particularly as preparation for Eid, have special management plans for the festival period, because they know it is a period of high volumes and high sales,” he said.

“Exporters have gone through tremendous steps to make sure their supply chains are prepared.

Sheep being caught at the Jordanian slaughterhouse. Image – Animals Australia.

“The department’s unwillingness to inflict any meaningful sanctions is why repeat offenders such as LSS continue to operate with impunity.

“No other industry regulator in Australia would allow a company that had committed 35 breaches of regulations, 16 of them critical non-compliances, to operate,” she said.

“Rather than offending exporters facing consequences for failing to adhere to regulations, tragically the animals continue to bear the consequences.

“The industry themselves know that there is not a single valid excuse for non-compliance in Jordan,” Ms White said.

“The fact that such brutal routine treatment of Australian sheep was occurring in one of LSS’s own approved abattoirs is damning,” she said.

“To see ALEC coordinating and facilitating LSS’s attempt to paper over the indefensible is disappointing.

“Suspending the facility and announcing further training is PR spin 101.”

Ms White said it has been 10 years since ESCAS was introduced into Jordan.

“Is LSS suggesting that the slaughtermen cutting the throats of conscious Australian sheep and throwing them to the ground in an approved facility were not trained?

“Any Australian farmer would walk into this abattoir, look at the set up and instantly recognise that this non-stunned slaughter line was going to be a ‘shit show’ of animal cruelty and suffering – and it was.”

Ms White said Animals Australia has done everything in its power to make the ESCAS system work by trying to provide some level of in country oversight and reporting breaches to the regulator.

“We now know we are powerless to fix this system and make it work.

“It is blatantly obvious that without regulatory deterrents, without fear of consequence, regulations will continue to be breached and the animal cruelty and suffering will continue,” she said.

“The reality is that the ESCAS system provides anything but assurance to farmers.

“In the end, my hope is that they will deeply consider choice who they feel is worthy of their trust and who they want to do business with. “