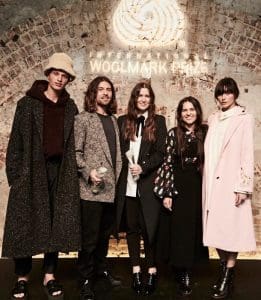 And fellow Aussie design house macgraw has won the womenswear section of the regional award at a ceremony in Sydney last week, with a two-piece look that impressed the judges.

Judge Jason Wu said the level of talent in the regional final was “really high”.

“All of the designers showed a great balance of creativity and commercialisation, which is integral today.”

macgraw duo – Beth and Tessa MacGraw – showed a two-piece look that featured an overcoat made of 17-18 micron Australian Merino wool and a pure wool dress made of 19.5 micron suiting fabric from Shandong Ruyi.

“Their ability to present, to share their point of view, and the amount of stores they are already stocked in speaks lengths of their talent,” Wu said.

“To the judging panel, they seemed the most ready to advance to the next stage.”

“Lukas came with a sharp point of view, a plan, a unique use of wool – he really transformed the material and definitely stood out as the clear winner,” Mr Wu said.

“It means so much for my business to continue pushing Australian fashion not only in Australia but internationally as well.”

An additional 36 countries have been included in this year’s International Woolmark Prize award. This includes New Zealand, Indonesia and the expansion of the European category. Six regional events are held in Hong Kong, Milan, Mumbai, New York, London, and Sydney to judge the regional winners.

Chosen from amongst the most promising fashion design talents, regional winners win A$50,000, plus the opportunity to compete in the prestigious international final. In addition, each winner will receive mentoring support from a global panel of experts along with being granted a Woolmark licence.

The final for menswear will be held during London Collections Men and the womenswear final will be held in Paris, both in January 2017.

The winners of the menswear and womenswear global finals will receive a further A$100,000 to assist with fabric sourcing and marketing of their collection, as well as mentoring from industry experts. In addition, both international winners will have the opportunity to have their collection distributed through the prize’s prestigious international retail partner network including Harvey Nichols in the UK, David Jones in Australia, Boutique 1 in the UAE, Verso in Belgium, LECLAIREUR in Paris, Boon the Shop in South Korea, The Papilion in Indonesia and online through mytheresa.com (womenswear) and MATCHESFASHION.COM (menswear).

The Woolmark Company is a subsidiary of Australian Wool Innovation, a not-for-profit enterprise owned by more than 24,000 woolgrowers that invests in research, development and marketing along the worldwide supply chain for Australian wool.

For more information on the International Woolmark Prize go to www.woolmarkprize.com