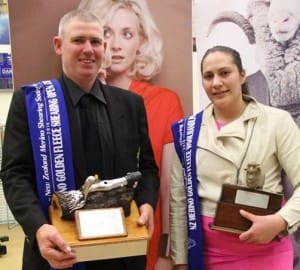 Boyle, 37, on Saturday night won the New Zealand Merino Championship’s open final in Alexandra for a sixth time in a row.

He won by just over two points from his expected toughest opposition, Invercargill shearer Nathan Stratford, whose win in 2009 was the last by a New Zealander in the event. Rakaia pair Grant Smith and Tony Coster were third and fourth respectively.

Boyle had signalled his form going into his title defence when he won the Royal Perth Show Open title for a 19th time.

The other big winner on the night was Masterton wool handler Pagan Rimene, who followed in the footsteps of both mother Tina Rimene and father Dion Morrell in also becoming an open champion in Alexandra.

Rimene’s mother last won the title six years ago while her father had won the event’s open shearing final three times, and was in the six-man showdown again last night.

Both father and daughter were also in a New Zealand Merino Shears shearing and wool handling team which beat a Royal Perth Show team.