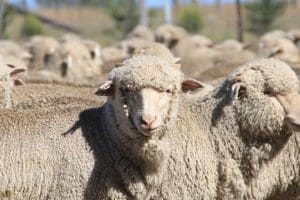 These unshorn Merino lambs at Armidale, NSW, sold to a Victorian buyer for $36 on AuctionsPlus last week.

THE online sheep and lamb offering continued to increase across eastern Australia last week, with AuctionsPlus reporting listings totalling 56,000 head, up 9000 on the previous week.

AuctionsPlus said the rise in listings continued in all states except Western Australia, led by New South Wales offering 33,000 sheep and lambs, as drought conditions rosined in most parts of the state.

Strong interest from SA and VIC looking for bargains

The NSW offering sparked large interstate interest in Victoria and South Australia, with 5500 sheep and lambs to travel south for the winter.

A line of 873 mixed sex unshorn September-October drop Merino lambs, 192kg lwt and score 1 in condition, at Armidale, NSW, sold for $36 to a Victorian buyer at Cavendish, 1400 kilometres away.

AuctionsPlus said Merino ewes and ewe lambs dominated the listings last week, with 20,500 offered. The lesser part of this offering were ewe lambs, but these sold to a top price of $122 for a line of July/August drop ewes at The Marra, NSW, that weighed 36kg lwt and had a 6cm fleece.

Prices eased for young Merino ewe breeders that averaged $131 and ranged from $70-$182. The top price was paid for a line 2.5 year-old 60kg ewes scanned in-lamb to Poll Dorset rams and carrying a 6cm fleece at Bridgewater on London, VIC.

Proven Merino breeders continued to slide in price, averaging $127 and ranging from $70-$166. The top price was paid for a line of 4.5 year-old 64kg ewes, at Mitiamo, VIC, that were scanned in-lamb to White Suffolk rams.

The online Merino wether offering steadied to 10,500 head. This was met with large buyer interest and a clearance of 80 percent, AuctionsPlus said. Interest was focused mainly on younger and lighter wether lambs that averaged $73 and ranged from $43-$94. The top price went to a large line of 800 July-August drop 39kg off-shears wether lambs at Harden, NSW. Older wethers averaged $72 and ranged from $69-$76. The top price was paid for a line of 1.5-7 year-old 42kg wethers at Barcaldine, Queensland, carrying a 5cm fleece.