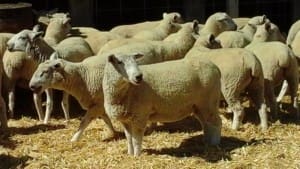 SHEEP and lambs offered on AuctionsPlus more than doubled last week as dry seasonal conditions continued across the eastern states.

Online sheep numbers increased to 56,241 head, 29,950 more than the previous week and ewes dominated the offerings, accounting for well over half the numbers.

AuctionsPlus said most ewes were Merino and these were highly sought after last week.

Merino ewe lambs averaged $60, with Blythvale blood future breeders at Streatham in Victoria selling for the top price of $65. Young ewes sold from $65-$160. A large line of recently shorn Eastville Park blood ewes at Bridgwater on Loddon in Victoria scanned in lamb to White Suffolk rams sold for the top price.

Proven Merino breeders averaged $129, with four year-old Lewisdale and Eastville Park blood ewes at Mystic Park in Victoria and scanned in lamb to Border Leicester rams made the top price of $160. Slightly younger Woodpark blood ewes at Holbrook, New South Wales, joined to Merino rams also sold for $160. Older ewes ranged from $40 up to $112 for 5-6 year-old Uardry blood ewes at Merriwagga, NSW, that were scanned to Poll Dorset rams.

Border Leicester/Merino ewes were the stand-out category last week, with a large flock dispersal of ewes at Wallinduc in Victoria topping the market in every category and all selling for an average of $47 above their reserve. The younger ewes attracted the strongest restocker competition, selling for $181, while the 3.5 year-olds made $173 and the 5 year-olds sold for $138. All ewes were scanned in lamb to Poll Dorset rams.

AuctionsPlus has announced it is adding more structure around auction times. Eastern states cattle and the Tuesday and Thursday sheep sales will run for a minimum of 40 minutes. From the 40-minute mark, the timer controls the auction – if there is no bidding activity on any lot within 20 seconds, the sale will close.

After Friday’s saleyard sales, the NLRS quoted the Eastern States Daily Indicators for most sheep and lamb categories as unchanged or lower. Only the indicators for Merino lambs and mutton lifted.

The national and ESDI for mutton finished up 1 cents to 310c/kg.

Lamb quality was very mixed with some good runs of finished and grain-assisted lambs along with the plainer types. Heavy and extra heavy weight lambs were in good supply. The usual buyers competed in a market that held fairly steady for the better lambs, but eased on the plainer types.

The NLRS said the quality of the heavy well-finished lines was good, while the secondary well-bred lambs were showing signs of the drier conditions. Mainly heavy lambs were penned, along with more secondary trade weights and store lambs. Most of the usual buyers attended and competition was reasonable, resulting in a firm to slightly cheaper market.