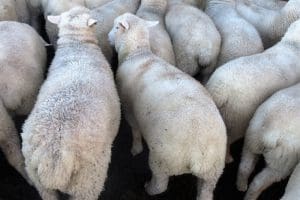 AuctionsPlus sold 2420 of the 8090 lambs offered in the sale, realising up to $151.90, or 620c/kg cwt including skin value, for 1000 April-May drop Poll Dorset new season lambs from the Bertangles Partnership at Hay. The lambs consigned from Hay Plains Livestock’s Ed Lilburne were estimated to weigh 24.5kg cwt on delivery on August 29 within a range of 18-32kg cwt.

A further 5670 2015 drop Merino lambs from Louth, Collie and Dubbo in New South Wales, sold from 500-530c/kg in post-sale negotations, exclusive of skin value (skins to be tendered post slaughter). These lambs are to be delivered at 18-32kg cwt (most 20-24kg), between mid-August and mid-September. All lambs were sold to Victorian processors, with the lambs from Louth having an additional freight component of about 40 cents. 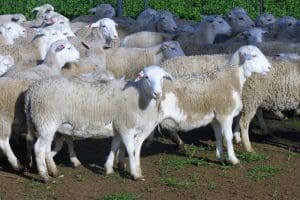 In saleyards mid-week, trade and heavy lamb prices continue to be driven by strong domestic demand with restockers competing for light and light trade lambs in the new season offerings.

After Thursday’s saleyard sales, the National Livestock Reporting Service’s Eastern States Daily Indicators for lambs were all up, except for the restocker category, which suffered a big drop of 83 cents to 542c/kg yesterday.

In New South Wales at the Central Tablelands Livestock Exchange at Carcoar, the agents yarded 4100 lambs, 500 more than last week, and 1650 sheep, 400 more.

The NLRS said following 50mm of rain over the past 24 hours, the yarding was back on the expected draw. It was a mostly plainer quality yarding with only a few pens of neat trade and heavy weight lambs.

The NLRS said the yarding included 2800 new season lambs. Quality was mixed in the trade and heavy categories. The old lambs showed the effects of the wet and cold conditions of the past fortnight. Not all export buyers attended or operated fully across the heavy export categories, but all domestic buyers participated strongly. Old trade lambs benefited from strong demand from major domestic processors, who pushed values of well-finished trade and heavy lambs up by $3. Supplementary-fed and shorter skinned trade lambs again attracted the strongest bidding and full wool types lacked fat cover.

New season lambs ignited the bidding, with the 20-22kg lines selling at $150-$168.20 and averaging 714c/kg. Heavy lambs sold to weaker export competition, with not all buyers attending. Generally prices were unchanged to $2 cheaper, averaging 667c/kg. Extra heavy lambs made $174-$222.

The NLRS said it was a typical low Sheepvention week offering of lambs and sheep with fewer buyers. There was also a drop in quality in the very mixed yarding, with more plainer light weight lambs and sheep.

The NLRS said lamb quality was mixed. Most of the regular buyers attended, but not all operated fully on the limited number of lambs.

Sheep quality was good and they were mostly $5 dearer. Restockers paid from $83-$116 for Merino wethers and to $111 for young Merino ewes. Some quality runs of full wool Merino wethers sold to $122.50.

In Queensland at the Warwick saleyards on Wednesday, the agents yarded 1695 lambs and hoggets, and 560 sheep.

Prices for the larger yarding of sheep and lambs were quoted as firm to a shade cheaper. The to-priced lambs made $160 for the Marshall family of ‘Heather Brae’, Greymare.

In Tasmania at Powranna and Killafaddy saleyards on Tuesday, the agents yarded 1650 lambs, 850 more than last week, and 650 sheep, 150 less.