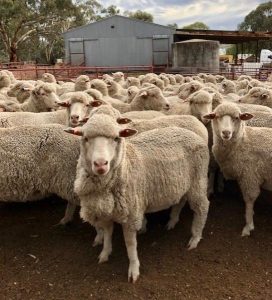 These scanned in-lamb Merino ewes at Bung Bong in Victoria sold for $341 on AuctionsPlus last week.

Clearance remained steady at 75 percent across all sales, with the central west region of New South Wales continuing as the highest purchasing are, with producers buying more than 15,500 after recent rainfall.

Recent weeks have recorded strong prices across all categories, but last week there some price corrections, with the biggest being a $39 fall in the average price of Merino ewe lambs to $200.

However, the average price for young Merino breeders increased by $29 and first cross ewe values lifted $40.

Merino ewe lambs sold from $135 to $281, with 90 percent of the offering sold. The top price was paid for a line of Apr/May 2019 drop Bundaleer blood lambs weighing 48kgs and with a 5.5cm fleece at Rand in NSW.

Merino ewe hoggets sold from $212 to $291 and averaged $252, down $9. The top price was for two separate lines, including by a South Australian buyer at Keith for a line of 22-23 month-old Angenup blood ewe hoggets at Narrogin, Western Australia, that were scanned in-lamb to White Suffolk rams. They weighed 52kgs and had a 4cm fleece. At Warroo, NSW, a line of Karbullah blood 18-20 month-old station-mated ewes that weighed 44kg with a 6cm also achieved the top price.

Young Merino ewes, 2-4 years-old, averaged $288 and sold from $185 to $341. The top price was paid for a ling of rising three year-old Karbullah blood ewes scanned in-lamb to Poll Dorset rams and weighing 52kgs at West Wyalong, NSW. At Lameroo, South Australia, three lines of rising three year-old ewes offered as a run out of the gate sold for $291 to NSW buyers. The ewes were scanned in-lamb to Suffolk and White Suffolk rams and weighed 58kg

Proven Merino ewes four years-old and older sold from $143 to $291, averaging $234, up $6. The top price was paid for a line of rising six year-old ewes scanned in-lamb to White Suffolk rams at Streatham in Victoria. The ewes weighed 62kgs and had a 6cm fleece. At Young in NSW, a line of 3-6 year-old Hazeldean, Collinsville and Richmond blood ewes weighing 57kgs sold for $253. WA sheep head across the Nullabor

In the Tasmanian sheep sale last week, there was full clearance of the 4534 head offered. Highlights included $214 paid for a line of Oct/Nov 2019 drop composite ewe lambs weighing 38kgs at Mole Creek. At Strathblane, a line of Sept/Nov 2019 drop Polwarth and Suffolk cross store wether lambs, weighing 43kgs sold for $162 to a Victorian buyer at Yea.