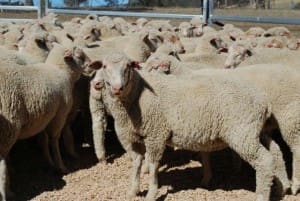 AuctionsPlus rounded off a record monthly throughput of 255,000 sheep and lambs last week, as saleyard prices held firm across the eastern states.

At the close of Friday’s saleyard sales, the National Livestock Reporting Service quoted all the lamb and mutton daily indicators within a few cents of the previous day’s mark. But all lamb and mutton indicators recorded significant weekly rises.

The ESDI for mutton closed at 363c/kg, down one cent for the day and up 14 cents for the week, while the national indice was up 1 cent to 362c/kg.

However, this did not stop the online auction service from cataloguing a record monthly offering of 255,000 sheep and lambs, plus 37,000 cattle, she said.

“Breeding stock of all descriptions continued to meet with keen interest.

“Scanned and joined Merino and first cross ewes available in southern NSW, Vic and SA, were in demand from buyers aiming to restock numbers and build up their flocks,” Ms Adams said.
Merino ewe hoggets averaged $110 and made from $50 to up to $151 for a line of
55kg liveweight unjoined Cottage Park and Demondrille blood ewes from Cooma, NSW.

Prices for young and aged joined Merino ewes also rose this week, making from $51-$155 with an average of $111. Ms Adams said a highlight was the number of lines from Wagga Wagga NSW that were scanned in lamb to Border Leicesters, and had a 2’’ skin.

There was also demand for Border Leicester/Merino ewes on AuctionsPlus last week. Ewe lambs averaged $110, and made up to $200 for a small line of 6-7 month 49kg lwt lambs from Dubbo, NSW. A line of 18-month-old 72kg lwt first cross ewe hoggets joined to Poll Dorsets from Wagga Wagga sold for $200.

The NLRS said lamb quality continued to be fair, with good numbers of well-finished lines, along with the plainer types. Most of the offering was heavy and extra heavy weight lambs. The usual buyers competed in a firm to slightly dearer market.

The NLRS said lamb quality improved, with a good run of heavy lambs in top condition. Most were heavy weights, with fewer trade lambs. There were more stores suitable for the restockers, but not all buyers were present. Demand fluctuated, resulting in a slightly cheaper market.

The NLRS said there wasn’t many export weight lambs and only limited pens of good domestic types available to buyers. The market showed a dearer trend but it was patchy and mainly only odd pens in each agent’s run recorded a much dearer result compared to the previous week.

The market reached a top of $152 for lambs estimated to have a carcase weight of about 26kg. There was more local restocker interest this week which helped support light weight lambs. Most sold from $70-$90 and very small lambs made $40-$60. The general run of domestic slaughter lambs, 18-22kg cwt, sold from $98-$119 and the better finished types made an estimated 540c/kg-560c/kg cwt, with odd pens higher. The limited offering of heavier lambs sold from $140-$152, averaging around 530c/kg cwt, but again with select pens higher at times.

The sheep were mainly smaller and mixed pen lots of ewes. Extra heavy crossbred ewes sold from $90-$120, while a small offering of Merino wethers sold to $95. The general run of trade and light weight slaughter ewes made from $40-$76.