AuctionsPlus premiums answer the ‘scan or not to scan’ question 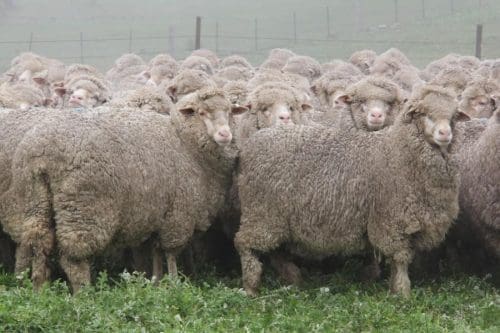 These scanned in-lamb rising three year-old Merino ewes sold for $353 on AuctionsPlus in mid-June this year.

From January to July 2020, even when selling Merino ewes with 10 percent multiples and 90pc singles, there was a $14/head premium for such lots over marketing similar ewes as just scanned in-lamb, without multiple/single scanning details.

The analysis was done by AuctionsPlus commercial manager – digital services Tom Rookyard and commercial operations officer Michael McManus. Mr Rookyard said no analysis has been done comparing the average difference in price between multiple/single scanned ewes and those listed as station-mated (ie. not scanned), but he expected the gap would be even wider. No analysis has been done on scanned versus unscanned first cross ewe prices.

The analysts said a severe deficit of breeding ewes across Australia was always going to put extreme pressure on the store sheep market once there was widespread rain. This is exactly what happened in the first months of 2020, and when key regions had drought-breaking rainfall, a scramble to restock paddocks against a 116-year flock low began, they said.

The AMI team looked at the potential premiums a seller receives when offering scanned in-lamb Merino ewes on AuctionsPlus, marketed as SIL nominating multiples and singles versus being sold as just scanned in-lamb.

The analysts said that like other sheep market categories, scanned in-lamb ewes have skyrocketed in value. Figure 1 below highlights the growth that prices for SIL Merino ewes have undergone since the widespread rain across the eastern states. They said there was 45 percent growth in average prices from December 2019 when SIL Merino ewes were averaging $180, to July 2020, where they are averaging $260.

From a management and selling perspective, he said the extra (scanning) knowledge is invaluable, as to understand the nutrition that your single ewes and multiple ewes need is critical.

“Obviously, there is an extra cost involved for the seller, sitting around an additional 25c/head; however, that is negated when selling.

“When scanning for clients, they know that buyers want more knowledge and will pay more for that,” Mr Harris said.

Figure 2 highlights the immediate value that a grower receives when selling ewes nominating multiples and singles, with an average of a $23/head more to be received. 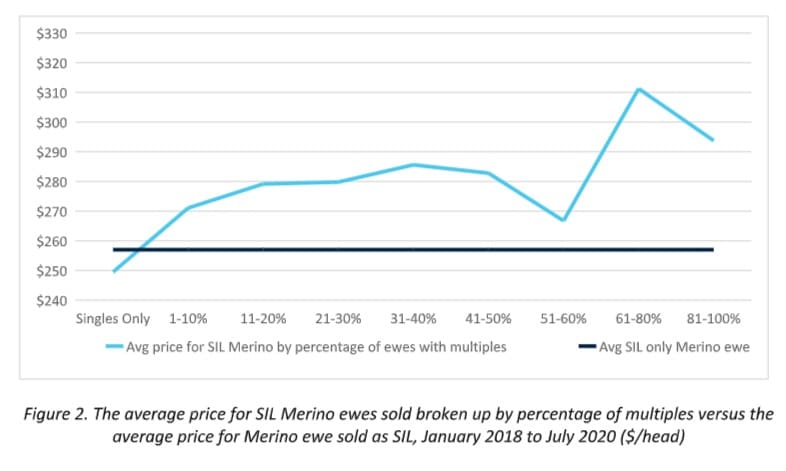 From a buyer’s perspective, livestock agent Adam Chudleigh from McCarron Cullinane Chudleigh at Forbes said he and his buyers always gain more confidence when buying SIL ewes with multiples and singles nominated.

“Buying nominated multiples gives our clients the confidence that they will get the lambs on the ground, providing them with many options to sell.

“Either into the store market to make a quick return or to feed through to hit the fat market,” he said.

Mr Chudleigh also highlighted the value that the added assurance and confidence provided when buying scanned and nominated stock.

“If vendors are willing to spend the extra money they deserve to receive additional value due to their management practices.”

The AMI analysts said reflecting on market results is the best indicator to dictate future buyer behaviour and see exactly what they are after.

“As evident through this article, the cost of scanning for singles and multiples has seen on average, a considerable price premium.

“It is clear that more information provided by the vendor offers an added level of confidence to the buyer increasing the likelihood of higher returns.”