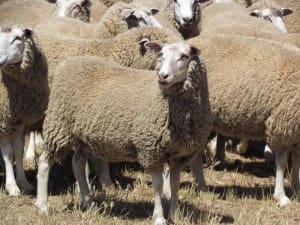 These 14-15 month-old Composite ewes near Hamilton, Victoria, sold for $181 on AuctionsPlus last week.

AUCTIONSPLUS sheep and lamb listings increased by more than 30,000 to 92,000 last week.

Store lamb numbers on AuctionsPlus followed the saleyard trends last week, but were also boosted by the annual North East Victorian Lamb Backgrounder & Finisher Sale. An abundance of Merino wether lambs made up to $94.50 and averaged $75.

The NLRS said the lamb offering’s quality was generally good, with well-presented shorn and unshorn lambs and some lines that lacked finish. Mainly trade and heavy weights were penned, with more shorn new season lambs. There was a large run of new season store lambs suitable for the restockers. All the buyers operated and demand was generally weaker, except for the store lambs, due to improved quality and competition.

The NLRS said it was a mixed yarding of lambs and sheep. Most lambs were offered in small pen lots of less than 30 head, and the limited selection and plain quality meant only a handful of the regular processing buyers attended.

A token supply of reasonable domestic and export slaughter lambs sold to $148 for a pen of young extra heavy weights estimated at more than 30kg cwt. A few pens of better presented trade weight lambs sold from $122-$133. The remainder of most lambs sold to processors for $85-$115 and reflected the lack of weight and secondary quality of most stock in the yarding. Carcase prices varied due to the mixed offering.

Restocker demand remained strong for lines of recently shorn store lambs, which sold from $93-$98 and averaged $96, similar to recent markets.