THE spot auction wool market reversed its upward trend and gave back almost half of the hard-fought gains of the previous two weeks.

Volatility continues to be the norm, with the key 21 micron index moving more than 3 percent for the fifth consecutive day and eight of the last ten.

The market seems to be following the pattern of last Spring, albeit at lower starting levels. Last season started with the market falling 35pc before becoming oversold and bouncing back 20pc. It then proceeded to lose half those gains before stabilising into the Christmas recess.

We have followed the first three legs of this pattern, but it would be a brave call predict a stable market in the current environment.

The forward markets again traded in light volumes, with fair value difficult for both buyer and seller to gauge. Sellers that took advantage of the short-term rally and hedged flat to this week’s closing cash.

Exporters remain keen to mitigate risk and manage margins. They are looking to match out a portion of their forward sales with bidding indicating levels at 2-3pc under spot out to the end of the year. This week’s fall has yet to bring out any significant interest from growers or provide exporters with realistic levels at where they could cover.

The chart below tracks the numbers of spot trading days where the movement in the 21 micron index moved more than 30 cents. We are only three quarters through the year and we have already equalled last year’s record. 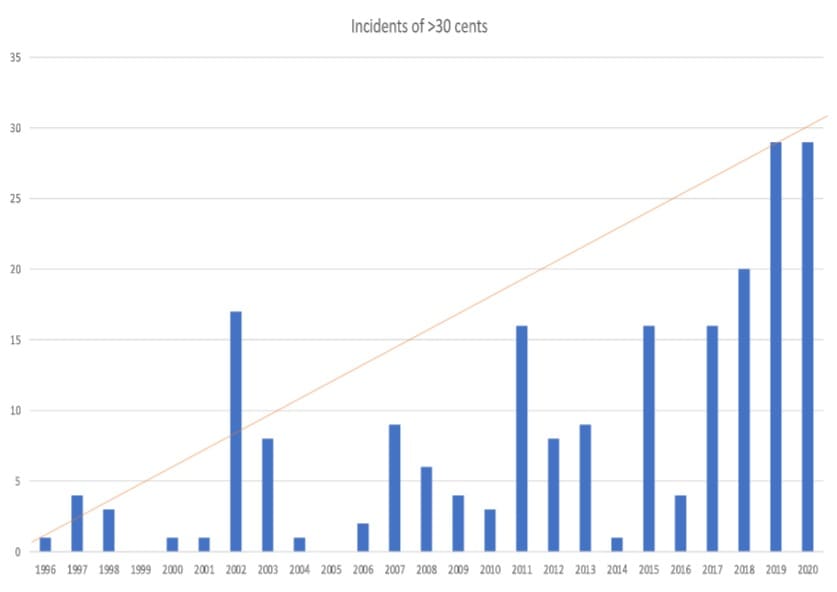