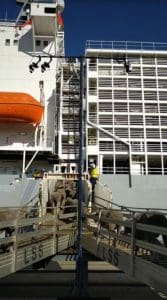 A LIVESTOCK counting system using artificial intelligence will be ready for the live export industry this year and for use in sheep saleyards by April 2020.

A team from the University of Technology Sydney has taken artificial intelligence technology already used regularly on roads to count cars and other vehicles, to develop a system of counting sheep using facial detection and recognition.

The UTS researchers have also been developing new technology for cattle facial detection and recognition.

Accurate counting is vital for the livestock export industry, as stocking densities, pen space allowances and feed stores need to be calculated precisely. It is also needed by abattoirs and saleyards checking stock numbers.

Video footage has been captured at feedlots and in Fremantle during a ship being loaded with sheep, and the computer ‘taught’ how to recognise individual animals. Click here to see a short video of sheep being counted onto a live export vessel.

Under optimal conditions, with sheep moving freely, the technology has demonstrated more than 98 percent accuracy and work is continuing with UTS to refine the system.

Lead UTS researcher Jian Zhang said five field trials have been run at the Fremantle port and also in saleyards.

“For the normal sheep running on the race with an extreme congestion, we can achieve 100pc (accuracy).

“We don’t need to limit the running speed of the sheep,” he said.

Associate professor Zhang said the system does not use electronic tag signals for counting.

“By using our AI-based video technology, we can do the accurate (~ 100pc) for unloading the sheep from trucks down ramps.

“We have tested our technology in Fremantle port (for sheep export) and in feedlots or saleyards.

“For the unloading, we are very confident that we can achieve 100pc.”

The project is funded by Meat & Livestock Australia and LiveCorp, and talks are being held with a New South Wales company on potential commercialisation.

“We are working with MLA not only for the sheep counting, but also for many other research and development projects, including animal welfare monitoring, free-yard weighing and growth estimation through image processing.”

Associate professor Zhang said the system would also be able to be used for pigs, and for nutrition status estimation and animal behaviour analysis.