Are sheep duffers turning to drones to steal from flocks? 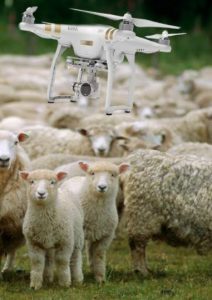 Are drones being used to steal sheep?

NEW South Wales police are investigating the recent thefts of hundreds of sheep across the state in separate incidents, including one case potentially involving a drone.

Police are investigating the theft of several hundred ewes from a property at Gilmandyke, west of Oberon, a Chifley Police District statement said yesterday.

Police said it appeared a gate has been removed at the rear of a property backing onto a pine plantation and the sheep stolen. The time frame for the theft is unknown, but the owner has said a count was conducted in October 2018. 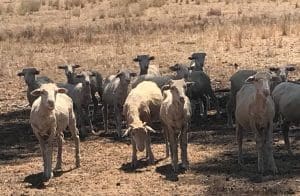 Merino wethers have been stolen from a Gum Flat farm. Photo – NSW Police.

The missing sheep were part of a mob of 650 and the loss has taken place sometime since September 2018. Police said the wethers had about 6 months wool when taken. They have an ear mark in the point of the nearside ear and a National Livestock Identification System tag with the Property Identification Code number NB251313.

Investigators from the Rural Crime Prevention Team at Inverell are keen to speak with any person who may be able to assist with any information in relation to the missing sheep or any person who has been sighted acting suspiciously in or around the Copeton Dam Road or Onus Road area at Gum Flat. The investigators have encouraged the reporting of all stock theft promptly, even of small numbers of stock.

Police are urging anyone with information in relation to this incident to call Rural Crime Prevention Team – Inverell 67220530/31 or Crime Stoppers on 1800 333 000.

Ewes and lambs stolen at Cookamidgera

In NSW’s Central West Police District, Parkes police are seeking information from anyone who may have information concerning the theft of sheep from a Cooka Hills Road property at Cookamidgera.

Sixteen ewes and 3 lambs were stolen sometime between the 14 February and 16 February this year. The ewes have blue ear tags bearing the PIC NF243054 and lambs were not tagged.

Police are also investigating two people trespassing on the same property on the 19/02/19, and at the same time a drone was flying around the northern side of the same. It is not known at this stage if the people associated with flying the drone relate to the missing sheep.

Anyone with information is encourage to contact police at Parkes Police Station or Crime Stoppers on 1800 333 000.